THE government of the Brazilian state of São Paulo confirmed on March 1 that tendering will begin this month for contracts to build the second phase of the Baixada Santista light rail network, which serves the port city of Santos. 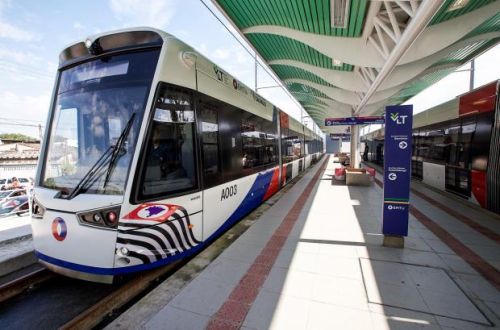 The Reais 450m ($US 139m) 8km extension will branch off the existing line at Conselheiro Nébias to serve the Valongo district in northern Santos.

Construction is expected to begin at the end of this year and the 14-station extension is due to be completed in 24 months.

The initial 11.5km line from Barreiros in São Vicente to the Port of Santos was completed last year. The line currently carries 22,000 passengers a day with services operating at eight-minute headways.

Phase 2 is expected to boost daily ridership on the network to around 70,000 passengers per day.

So far 21 of the 22 low-floor LRVs required for phases 1 and 2 have been delivered to Santos.

Within four years, the network will be extended along the coast from Barreiros to Samaritá. The 7.5km third phase extension will add a further four stations to the network. The basic project plan was completed in December 2017 and a contract for the execution of the executive project plan will be tendered this month.

According to Mr Joaquim Lopes, CEO of São Paulo Urban Transport Company (EMTU), the light rail network is the biggest investment in mobility in Baixada Santista for half a century. “With these two extensions, the LRT network will reach 26km,” Lopes explains.

Studies for the third phase will be completed next year, enabling EMTU to begin tendering.