Construction of the new 5.4km line will start imminently and is expected to be completed in 2025. 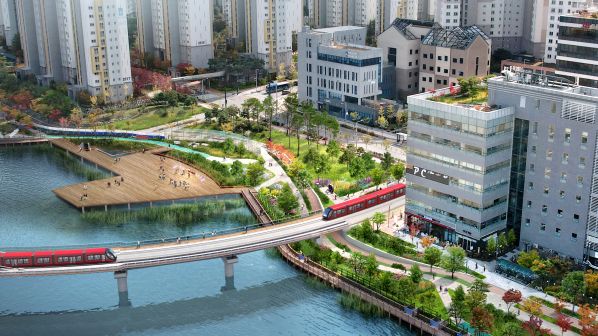 LIGHT Rail will return to South Korea’s capital for the first time in 57 years following the approval of the Wirye Line, which is due to open in 2025.

Korea’s Ministry of Land, Infrastructure and Transport announced on November 28 that the Won 261.4bn ($US 200m) project had been approved by the Metropolitan Transport Commission and that construction would begin within the week.

The 5.4km Wirye Line will be located in Wirye New Town, a new urban development in southeast Seoul, and will  serve 12 stations in Seongnam in southeast Gyeonggi province. LRVs will operate from Macheon station on Seoul metro Line 5, travelling south through the city of Seongnam and terminating at Bokjeong station, interchanging with Line 8 and the Suin-Bundang commuter rail line.

A branch will run to Namwirye station, also on Line 8, with less frequent services.

The low-floor battery LRVs will be manufactured by Woojin Industrial Systems which was awarded a contract in December last year. Rolling stock will be maintained at an underground depot, which will have a park build above it.

The Wirye Line is scheduled to be completed in September of 2025 and it is hoped it will reduce traffic congestion and boost the local economy once open.