Trams returned to the heart of Luxembourg City on July 27, with the opening of the 1.6km section from Pont Rouge to Place de l'Etoile. 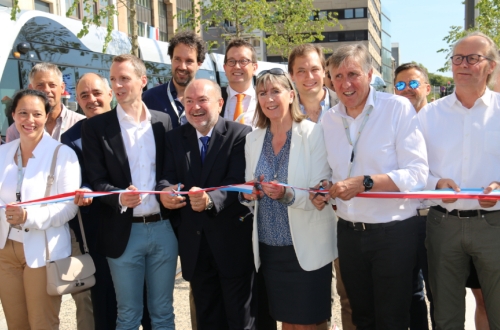 Officials at the opening of the line.

The new section was opened by the minister of sustainable development and infrastructures, Mr François Bausch, mayor of the City of Luxembourg, Mrs Lydie Polfer, alderman in charge of mobility, Mr Patrick Goldschmidt, and the managers of tram operator Luxtram.

The newly opened section is completely catenary-free and CAF has been awarded a €40m contract for another 12 Urbos 3 low-floor LRVs fitted with supercapacitor accumulator technology for ground-level rapid charging at stations to operate on the line, in addition to the nine CAF trains currently operating on the Luxexpo - Stäreplaz/Etoile line.

The section is part of a €549m project to build a 16km route through the city, which will have 24 stations and frequencies of between three and five minutes.