Siemens is building 75 diesel locomotives for Amtrak under contract signed in December 2018. 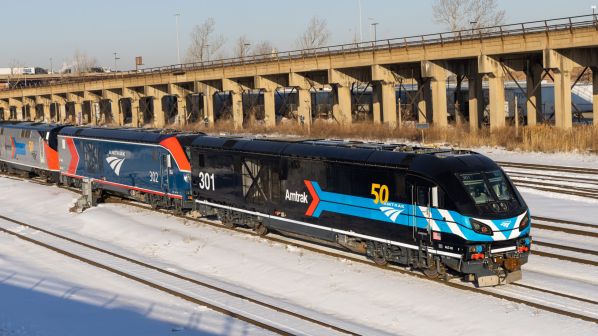 Amtrak placed the $US 850m order with Siemens in December 2018, which includes a 20-year technical support and spares supply agreement. Siemens is manufacturing the locomotives at its plant in Sacramento, California.

The four-axle 200km/h Charger is equipped with a 16-cylinder Cummins QSK95 diesel engine, which is compliant with US Environmental Protection Agency Tier 4 emissions standards and was manufactured in Seymour, Indiana. Amtrak says the 200km/h ALC-42s consume significantly less fuel and reduce nitrogen oxide emissions by 89% and particulate matter by 95% compared with the P40 and P42 units they are replacing, some of which have been in service for more than 25 years on state-supported routes and long-distance services.

Mr George Hull, Amtrak vice-president and chief mechanical officer, says Amtrak is working with Siemens to order more of the locomotives, in particular for long-distance services. Amtrak has already placed a $US 3.4bn order with Siemens for 73 push-pull trains for use on the North East Corridor and state-supported routes, confirming the deal in July 2021.

The first locomotives were delivered in summer 2021 and the full fleet is expected to enter service in 2024. As well as the Chicago - Seattle/Portland Empire Builder, the new locomotives will serve the following routes: