AN inauguration ceremony for the Andora - San Lorenzo section of the Genova - Savona - Ventimiglia line was held on December 11 with Italy’s vice-minister of infrastructure and transport Mr Riccardo Nencini, Liguria’s governor Mr Giovanni Toti, and regional deputy for occupation, transport, tourism and human resources, Mr Giovanni Berrino, participating in the inaugural journey on the line. 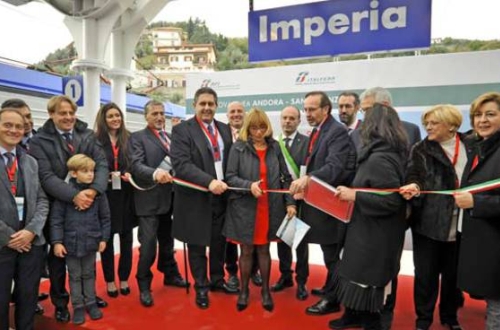 The new double-track line follows on from the 19km extension from San Lorenzo to Ospedaletti which includes 16km of tunnels, and which opened in 2001.

The control room for the section is located at Genova Teglia and will permit speeds of up to 180km/h on the line. The new line will offer 10 journeys between Savona and Ventimiglia, meaning 62 trains will call at Imperia.

The total investment for the project is €582m.