An EU-wide tender will be launched to purchase seven hydrogen multiple units. 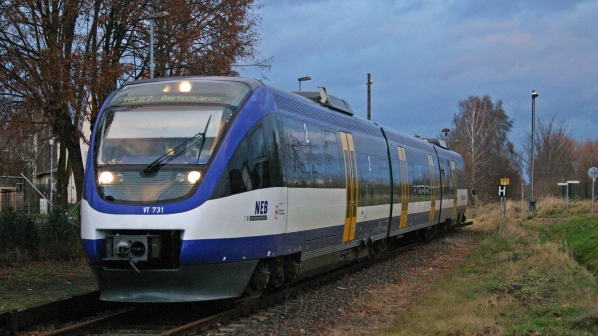 THE states of Berlin and Brandenburg and train operator and infrastructure manager Niederbarnimer Railway (NEB) have concluded negotiations on the first deployment of hydrogen fuel cell trains in the German capital region.

The agreement will enable the parties to start preparations for hydrogen train operation on the Berlin-Wilhelmsruh - Basdorf line, which is due to reopen to passenger service in 2024. This process includes the development of hydrogen infrastructure and the procurement of rolling stock. An EU-wide tender will be launched for seven hydrogen multiple units, each seating around 140 passengers with space for 12 bicycles.

The Federal Ministry of Transport has allocated €25m to the hydrogen train project through a grant awarded to NEB and its project partners, renewable energy supplier Enertrag and municipally-owned energy firm Kreiswerke Barnim.

All train operation will use green energy and the decision to opt for hydrogen instead of diesel is forecast to reduce CO2 emissions by 3000 tonnes annually while cutting diesel consumption by 1.1 million litres.

In the first phase of operation, an hourly service will run from Baasdorf to Berlin-Wilhelmsruh between 05.00 and 23.00. The second phase, which involves extending services to Berlin-Gesundbrunnen and increasing frequencies to half-hourly by 2028, is being developed as part of Berlin and Brandenburg’s i2030 infrastructure programme.