Cornerstone laid for Modi’in curve on Israel’s A1 link

A ceremony to mark the laying of the cornerstone for the Modi’in curve, a new 2.5km direct link between Modi’in and the new Jerusalem - Tel Aviv A1 Link, was held at Modi’in Outskirts station on March 14. 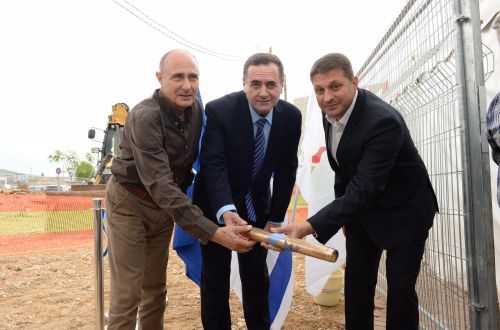 The $US 90m project will offer a direct rail connection from Modi’in to Jerusalem for the first time. The curve will run north east from the A1 link to connect with the branch running southeast to Modi’in from Tel Aviv and is scheduled to be completed in the last quarter of 2019. The new link will offer a journey time of 17 minutes between Modi’in and Jerusalem, with two trains operating per hour per direction at peak times.

The project also includes upgrades to Modi’in Outskirts station, including a new car park to the south of the station, construction of an overhead pedestrian bridge to the nearby Isparo mall, new rail bridges, supporting walls, and track infrastructure.

The 57km A1 Link is scheduled to open in 2018 and will cut journey times between Jerusalem and Tel Aviv to 28 minutes from 1h 18min at present.