GERMAN Rail (DB) subsidiary DB Regio has been selected by Schleswig-Holstein transport authority NAH.SH for the Schleswig-Holstein Rail Network West concession, which covers the operation of regional services on the line from Hamburg to Westerland on the island of Sylt. 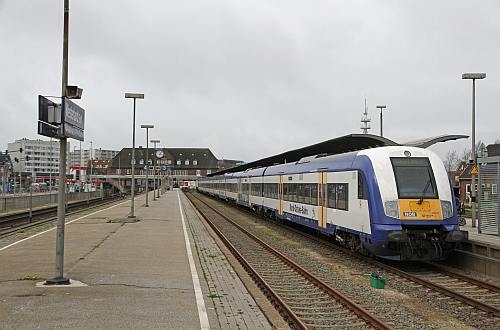 DB Regio faced competition in the tender from Abellio and the incumbent operator, Transdev subsidiary Nord Ostsee Bahn - NOB (Transdev). The unsuccessful bidders were informed on July 15 and the contract award becomes definite on July 25. DB will take over the service in December 2016 with a nine-year contract.

The contract requires DB to use the existing fleet of 90 Bombardier-built coaches introduced in December 2005 and three Alstom Lint 41 DMUs together with 15 new Bombardier Traxx ME Class 245.2 diesel locomotives leased from Paribus on behalf of NAH.SH. Around 18,000 passengers per day use the two services operated in the contract, which are RE6 (Westerland – Hamburg) and RB62 (Heide – Itzehoe).

The contract covers around 4.2 million train-km per year and offers a number of improvements with additional capacity at peak times, onboard Wi-Fi and improved connections between RE6 and RB62 services. Between Easter and October two new weekend "Sprinter" services operate between Hamburg and Westerland, reducing the journey time by around 20 minutes.

NAH.SH tendered the contract on a net basis whereby the operator takes on some revenue risk as well as infrastructure payments.