DB squares up to bus threat with long-distance strategy

GERMAN Rail (DB) has unveiled plans to significantly enhance its long-distance services in Germany in a bid to attract 50 million more passengers annually by 2030. 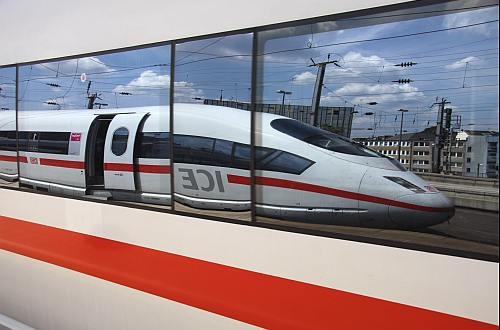 Half-hourly ICE services will link all major conurbations, in many cases doubling the current frequency. This will be implemented between 2016 and 2022 as new trains enter service and new high-speed lines open.

The new network also includes new inter-city connections serving a range of provincial cities such as Chemnitz, Hof and Krefeld which have not been served by DB long-distance trains since the abolition of the Interregio network more than a decade ago.

The new Inter-City network will serve all cities with a population of more than 100,000 with at least one train every two hours. DB says it is deliberately offering many more direct services, emulating the long-distance buses which pose an increasing challenge to DB's long-distance services.

DB says it will invest €12bn in the creation of the new network, most of which is already committed through orders for new rolling stock and high-speed line construction.

DB plans to operate the future network with 360 ICEs, 130 ICx trains, and 120 new Bombardier Twindexx double-deck locomotive-hauled sets, suggesting a follow-on order will be placed for the latter.

The entire ICE 3 and ICE-T fleet will be refurbished from 2017 onwards and DB will offer free Wi-Fi on all services in both first and second class. New lower advance fares starting at €19 will be introduced from next year, a reduction of a third compared with the current €29 base fare.

DB says the plans will enable it to increase long-distance ridership from 130 million in 2015 to 180 million by 2030, 5 million of whom are expected to come from other modes.