BRITAIN’s East Midlands franchise will need to see renewal and expansion of its train fleet to meet the demands of the next decade, according to a report published on September 16 by incumbent operator East Midlands Trains (EMT). 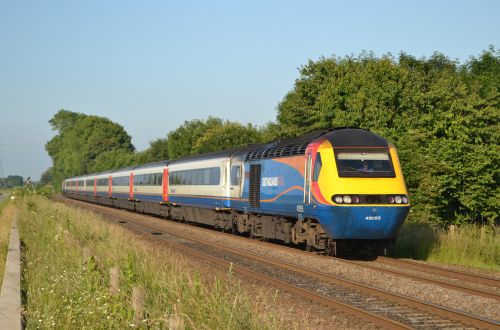 The rport calls for the replacement of ageing HSTs with a new fleet of bi-mode trains.
Photo Credit: Keith Barrow

The report, entitled East Midlands: A Railway for Growth, has been prepared with input from local authorities, businesses, academic institutions, and other key stakeholders in central England. It is intended to support the forthcoming consultation on the new East Midlands franchise, which starts in 2018.

Priorities identified in the report include:

The report notes that the forthcoming electrification of the MML offers an opportunity for fleet renewal on the franchise’s core inter-city corridor. Under Network Rail’s revised schedule for the project, electric services are not due to reach Derby, Nottingham and Sheffield until December 2023, but extending the life of the HSTs beyond 2020 is likely to cost around £5m per train, which the report considers to be poor value. A fleet of 200km/h bi-mode trains is therefore proposed to provide the benefits of new rolling stock before electrification is completed and to serve stations beyond the wires.

According to statistics from the Office of Rail and Road, the average age of the EMT fleet at the beginning of 2015 was 23.3 years, compared with a national average of 20.1 years. Operators of franchises with older rolling stock, including Great Western, East Anglia and Thameslink, have committed to major renewal programmes over the next few years, which will drastically reduce the average age of their respective fleets.

The Department for Transport (DfT) plans to invite expressions of interest for the new East Midlands franchise in December. An invitation to tender will be issued to shortlisted bidders in April 2017 and the contract will be awarded in March 2018, with the franchise starting in June.