THE Italian region of Emilia-Romagna has agreed a new public transport plan for 2018-2020 which includes the almost total renewal of the train fleet by 2019. 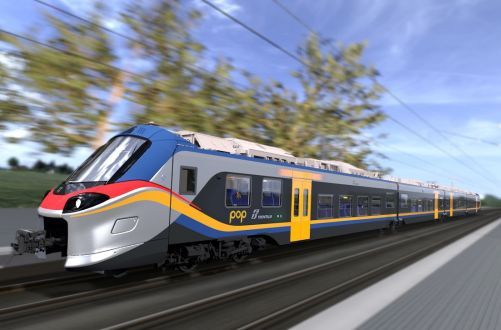 Artist's impression of a Trenitalia Pop EMU, which is based on Alstom's Coradia Stream platform.

The deal was signed on December 11 by the region’s president Mr Stefano Bonaccini, the Metropolitan City of Bologna, and public and private partners, in the presence of Italy’s minister of infrastructure and transport, Mr Graziano Delrio, and the regional councillor for mobility and transport, Mr Raffaele Donini.

The deal envisages the purchase of 75 trains and 600 buses, improving road-rail integration by allowing around 36,000 rail commuters free travel on buses operating in 13 cities in the region, and the introduction of e-ticketing.

By 2019, 86 new Alstom Pop and Hitachi Rail Italy Rock EMUs will enter service to add to the Hitachi Vivalto push-pull double-deck coaches and Stadler Flirt EMUs already in operation. Rock double-deck trains can seat up to 600 passengers, while three-car Pop EMUs have more than 200 seats and the four-car version seats 300 passengers. Both types of train have a maximum speed of 160km/h, are air-conditioned, equipped with CCTV and electric power sockets, and have facilities for disabled passengers.

Next year, the Bologna - Ravenna and Bologna - Rimini lines will be upgraded in order to reduce journey times to 60 and 44 minutes respectively.

From January 2019 services currently operated by Trenitalia and TPER, under a 15-year concession awarded in July 2015, will be merged into a single railway company.

An agreement was also signed on December 11 between the region, Emilia Romagna Railway (FER), and Italian Rail Network (RFI) to transfer the management of the regional rail network to RFI. In addition, the network will be upgraded and safety improved under a 10-year €1bn infrastructure investment plan.

The Italian government, in cooperation with the regions, plans to reclassify some regional lines as railways of national interest, which could include the Parma - Suzzara - Ferrara, Casalecchio - Vignola Reggio Emilia - Sassuolo, and Reggio Emilia - Guastalla lines. The idea is for RFI to take over the management of these lines, thereby reducing the financial burden on the regional governments.