BRITAIN’s Department for Transport (DfT) has selected a joint venture of FirstGroup and Trenitalia UK as operator of the West Coast Partnership (WCP) franchise, which encompasses inter-city services on the West Coast Main Line (WCML) and the initial phase of operations on High Speed 2 (HS2). 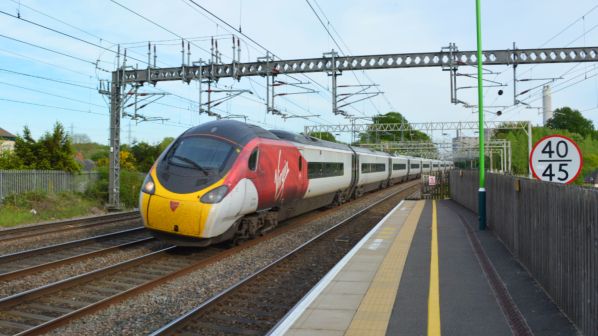 The 70:30 First Trenitalia West Coast Rail joint venture will take over operations from Virgin Trains on December 8. In the first phase of the franchise, First Trenitalia will operate existing InterCity West Coast (ICWC) services while acting as shadow operator for HS2, providing design, development and mobilisation services for the new line from London to Birmingham and Crewe.

First Trenitalia will operate ICWC services as a normal franchise, sharing revenue risk with the DfT through a GDP-based revenue protection mechanism and an additional Forecast Revenue Mechanism (FRM) from April 2021. The former mitigates the financial impact of macroeconomic conditions, while the FRM can be triggered if revenue variances exceed a set threshold from the bid assumptions for any reason. FirstGroup says it believes its TransPennine Express and South Western Railway operations would have remained profitable if these revenue sharing mechanisms had been included in the agreements for these franchises.

First Trenitalia expects to generate premium payments of £1.6bn in real Net Present Value during the first phase. the joint venture will directly fund £11m of residual value assets, and deductions from the premium will fund First Trenitalia's £252m investment in the first phase. A further £453m will be funded by rolling stock leasing companies for new and refurbished trains.

First Trenitalia forecasts a combined annual growth rate (CAGR) for seat miles of approximately 1.2% annually during the first phase. Passenger revenues, which were £1.2bn in 2018-2019, are expected to increase at a mid-single digit CAGR over the duration of the first phase, lower than the historic growth rate of the franchise over the last decade.

In the second phase, First Trenitalia will operate the recast ICWC services and HS2 services between March 2026 and March 2031 as an integrated operation under a management contract, with revenue and cost risk transferring to the DfT.

During the second phase, First Trenitalia will be paid a management fee equivalent to a low single digit margin annually, with additional incentive payments for good performance. The contract includes an option for a three-year extension.

The fleet of 56 Alstom class 390 Pendolino tilting EMUs currently used by Virgin will be refurbished at a cost of £117m with 25,000 new seats, additional luggage space, improved passenger Wi-Fi and at-seat power sockets across the fleet with wireless charging and onboard entertainment. Catering will also be upgraded with at-seat service in both first and second class.

First Trenitalia says it will introduce “an easily understandable range of fares and fewer ticket types” with an “easy and rapid” delay-repay system and mobile and smartcard ticketing.

By 2022 the joint venture will introduce 263 additional services per week, with new direct services to Liverpool South Parkway, Walsall and Gobowen and increased services for Rugby, Llandudno Junction, and Motherwell.

Subject to approval from the Office of Rail and Road (ORR), First Trenitalia will operate two services per hour between London Euston and Liverpool Lime Street.

A new fleet of 10 EMUs and 13 bi-mode multiple units will be introduced by December 2022 to operate the enhanced timetable and replace the fleet of class 221 Voyager DMUs, which are used on services from London to North Wales, operating long distances under the wires. In the meantime, the fleet of 20 five-car Voyager trains will be internally refreshed.

First Trenitalia says the replacement of the Voyager fleet will enable it to reduce rolling stock CO2 emissions by 61%. LED lighting and driver advisory systems will also be installed to improve the environmental performance of the fleet.

Stations will be upgraded with improved waiting rooms, shelters and seating. New first class lounges will be opened at Preston, Stockport and Rugby, while ticket offices at Glasgow Central, Preston and Rugby will be modernised. Passenger Wi-Fi will be upgraded and 10 new secure cycle storage facilities will be built. There will also be 900 additional parking spaces and 100 electric vehicle charging points.

The new franchise will invest £20m in performance enhancements, including developing joint plans with infrastructure manager Network Rail to reduce incidents and installing onboard and trackside infrastructure monitoring equipment.

Following confirmation of its win in the WCP procurement, FirstGroup chief executive Matthew Gregory confirmed that the firm will not be bidding for any upcoming rail franchises in Britain.

“The differences between this contract and more traditional rail franchises were reflected in the terms set out by the DfT, which has resulted in a more appropriate balance of risks and rewards for us as operators,” Gregory says. “The WCP first phase allows us to earn returns on the significant investments in services and facilities for passengers but protected by a much improved revenue risk sharing mechanism. This will transition to a management contract in the second phase, ensuring we can really focus on using the respective skills and experience within our joint venture to deliver the desired benefits of the HS2 project for passengers and the country.

“The Partnership strengthens and adds a fourth franchise to our UK rail portfolio. Following this award we will not therefore be seeking new franchising opportunities for the foreseeable future over and above our current negotiations with the DfT to extend Great Western Railway (GWR). Our focus remains on delivering sustainable shareholder value and we will actively manage our rail portfolio and its risk and reward profile accordingly.”

FirstGroup says its board has carried out extensive reviews of the WCP proposal and the bid assumptions have been tested and revalidated in accordance with the firm's May 30 commitment to seek an "appropriate balance of potential risks and rewards for shareholders."