WORKING in partnership with Leo Express, Czech Republic, FlixTrain launched its inaugural service from Berlin to Stuttgart on April 26, reviving the short-lived Locomore service between the two cities. 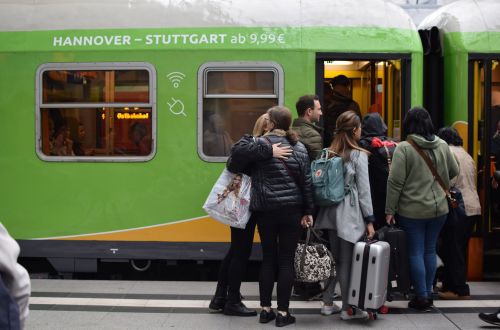 A ceremony was held in Berlin to mark the start of the new service, which was attended by Mr Fabian Stenger, managing director of FlixTrain, and German Transport Ministry’s permanent secretary, Mr Enak Ferlemann.

The train will initially operate daily, departing from Berlin Lichtenberg at 14.28 and arriving in Stuttgart at 21.29. The train serves five stations in Berlin and stops include Hannover and Frankfurt. The train from Stuttgart departs at 06.39 and arrives at Berlin Zoo station at 12.57, terminating at Lichtenberg at 13.38.

Flixtrain plans to increase the frequency of the service to two return journeys per day from the end of July. Tickets are priced from €9.99 and Stenger says demand has already exceeded expectations.

“We see FlixTrain as a supplement between the intercity bus and the ICE,” Stenger says. “Although we are sometimes a little slower than the ICE, but also cheaper.”

FlixTrain says it has received more than 100,000 bookings since it launched its first service between Hamburg and Cologne in early March on the route formerly operated by HKX. With up to 500 passengers per train, its occupancy rate is 50-70%. FlixTrain has submitted plans for new routes for the December timetable change, and envisages introducing services between Berlin and Cologne, and Munich and Berlin, with a return train in each direction per day. This could later be expanded to two to three trains in each direction per day.

FlixTrain is a subsidiary of FlixMobility, which operates the FlixBus long-distance coach network. The holding company handles development, sales and marketing, while operations and fleet management are provided by partners, in this case Leo Express.

“New entrants attract additional customers to rail and bring about modal shift,” Ferlemann says. “It should no longer be the case that the incumbent remains a monopoly with a 99% market share in long-distance passenger transport.”