GREEK infrastructure manager Ergose celebrated a milestone in the upgrading of the Athens - Thessaloniki corridor on January 31, when the new line between Tithorea and Leianokladi was handed over for the start of commercial operation, 21 years after the start of construction. 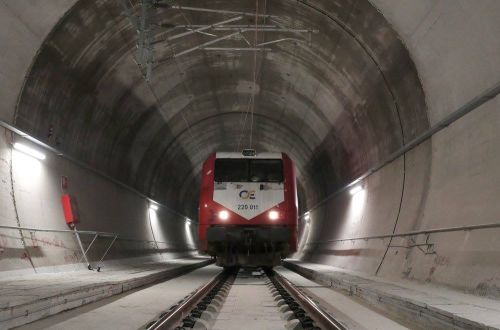 The electrified line forms the major part of the new 106km double-track alignment between Tithorea and Domokos, replacing the existing 122km single-track line, which suffers from steep gradients and sharp curvature.

The €1.8bn line has a design speed of 200km/h and includes new stations at Molos and Agios Stefanos. The line is electrified at 25kV ac 50Hz and equipped with ETCS Level 1.

The project involved the construction of 30.83km of single-bore tunnel, 4.5km of twin-bore tunnel, 4km of cut-and-cover tunnel, and 6.1km of bridges. The main engineering feature is the 9036m Kallindromo Tunnel, which is the longest railway tunnel in the Balkans.

The remaining section between Leianokladi and Domokos is due to be commissioned later this year.