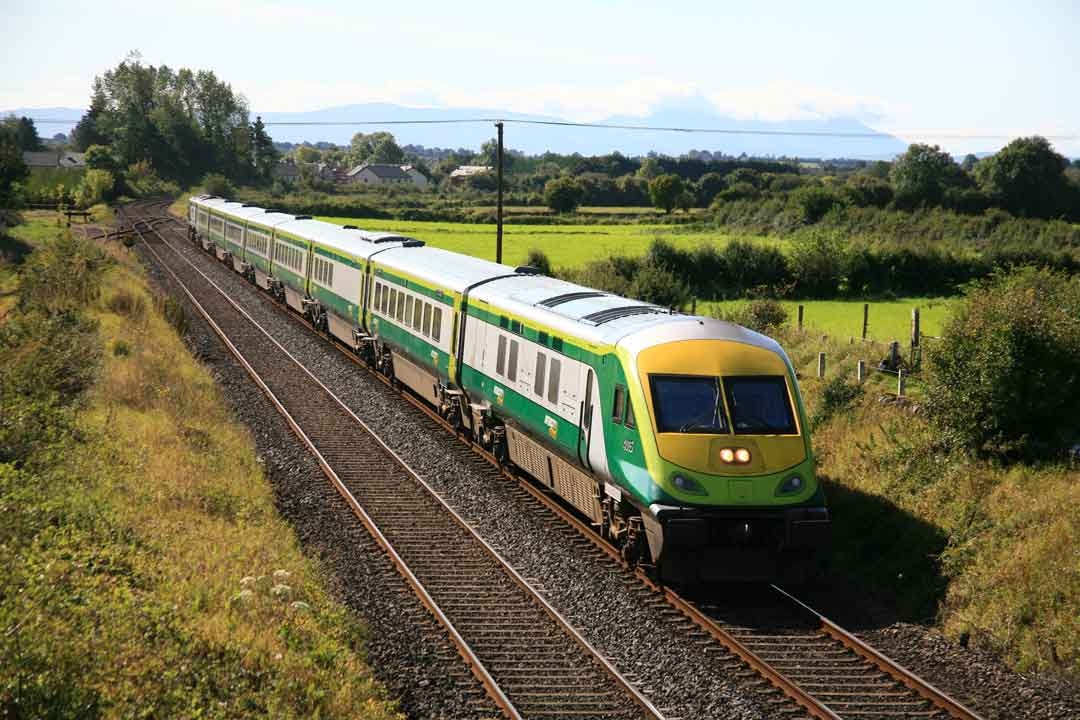 IRELAND's €100bn bail-out by the European Central Bank and the International Monetary Fund in November 2010 has forced the country to make some tough decisions on public spending. The Irish government has wiped €775m off its €4bn capital budget for 2012, and rail projects such as Dublin's Dart Underground cross-city commuter rail link and Metro North have been postponed or cancelled.

While nobody can say for certain how long Ireland will have to endure such belt-tightening, Irish Rail (IE) CEO Mr Dick Fearn stresses that the country should not be deterred from mapping its long-term infrastructure needs. Unveiling IE's 2030 Rail Network Strategy Review in Dublin on February 22, he said: "It would be easy in today's environment to focus solely on short-term measures needed to ensure financial viability and the protection of existing services. However, rail development must always be considered in the medium and long-term strategic context."

The review, commissioned by IE and conducted by Aecom and Goodbody, aims to provide a basis for the strategic development of the national network (excluding the Dublin area, which was covered in a separate review) in the period to 2030. It notes that over the last decade, infrastructure improvements have been accompanied by significant investment in rolling stock to give IE one of the youngest inter-city fleets in Europe, with all the associated benefits of extra capacity and improved reliability. This has been accompanied by ridership growth on inter-city routes, which averaged around 4% per year over a long period, peaking at 45.5m in 2007 before slipping back to 38.2m in 2010 as the economic crisis began to bite.

The key inter-city passenger flows are on routes radiating from the capital to regional centres including Cork, Galway, Limerick, Waterford, and Sligo, as well as the cross-border Enterprise service to Belfast. There is also strong demand between regional centres and large towns within their catchment, although journeys between regional cities remain low. Some secondary rural and cross-country routes remain, although service frequency is poor and journeys are often slow, which is reflected in low ridership.

Service frequency varies significantly according to demand, although the report notes that the routes from Dublin to Belfast and Galway suffer a relatively low frequency in relation to the population they serve. On both of these key routes, the report suggests there is significant potential for improving journey times, and therefore service quality, by addressing temporary and permanent speed restrictions.

Reducing journey times for all trains on both routes to two hours, and cutting 15 minutes off the 2h 45min Dublin - Cork journey would, the report suggests, give rail a significant competitive advantage, and an annual investment of around €50m per year over the next five years could deliver even greater improvements. The report suggests investing €42m in boosting line speeds between Dublin and Cork, together with the introduction of consistent stopping patterns, would deliver benefits of €506m, making it an early priority.

Without improvements, and based on current economic and demographic trends, the review anticipates that long-distance ridership will not recover to 2007 levels until at least 2015, after which growth will return to around 1.9% per year. This means that by 2030, IE's long-distance passenger numbers will reach 31.1 million, a 46% increase over 2009 levels, with the potential for more if rail can win traffic from other modes.

The review stresses that in order for rail to fulfil its potential, track renewals need to be safeguarded, with adequate resources allocated to infrastructure and rolling stock maintenance, while building on the investments already made by IE, to achieve their maximum potential benefit to the recovering economy. It also suggests concentrating future investment and service improvements on links between major centres, in particular the routes from Dublin to Cork, Limerick, Belfast, Galway, and Waterford, and improve links to airports to make rail a more attractive option for tourists.

The report therefore recommends a three-phase investment plan to develop the network. This is based on an annual infrastructure maintenance and renewal spend of €215m, roughly the same as current levels, with €116m for rolling stock.

Over the next three years, small improvements to improve journey times are recommended, with the main emphasis on the Cork and Galway lines, and improving utilisation of existing rolling stock to increase frequencies. A new park-and-ride station near Dublin is also recommended, which would be connected to the city's airport via a bus link, giving passengers from the south and west of Ireland better access to the airport. It is argued that these measures would provide a rapid return on investment through increased revenues.

The second phase would cover the period 2015-2020, with the primary aim of responding to long-term growth in ridership. Key investments would include: track-doubling of the Portarlington - Athlone line to allow an hourly service on the Galway line; alternate direct and indirect Dublin - Limerick services, offering a two-hour journey time (15 minutes faster than today); upgrading Limerick Junction station; and doubling the Dublin - Wexford - Rosslare frequency.

In the third phase covering 2020-2025, the report advocates the electrification of lines from Dublin to Cork, Galway, and Belfast, but notes that electrification will yield a higher return on investment if it is carried out at a time when rolling stock is due for renewal. Services on both the Belfast and Cork lines are largely formed of locomotives dating from the mid-1990s with push-pull sets.

The coaches used on the Dublin - Belfast Enterprise services date from 1997 and the Mk4 vehicles used on the Cork line and Hyundai-Rotem dmus used on Galway services were all delivered after 2006. These fleets will only be approaching mid-life in 2020, making wholesale replacement an unlikely option.

In the decade prior to the economic crisis, pressure grew for the reinstatement of regional services and this resulted in the reopening of a number of lines, including the Glounthaune - Midleton line near Cork and the initial phase of the Western Rail Corridor between Ennis and Athenry, which has allowed the reintroduction of Limerick - Galway services.

However, the review's appraisal of other schemes, including the extension of the Midleton line to Youghal, reinstatement of the Mullingar - Athlone line, and extension of Northern Ireland Railways' Londonderry line to Letterkenny, suggest the economic and social case for further reopenings is weak. In fact, just one project, the Athenry - Tuam section of the Western Rail Corridor, is considered viable.

The Ennis - Athenry section of the Western Rail Corridor reopened in 2010, and provides a direct link between the cities of Limerick and Galway. While commuting demand from its catchment into Galway and Limerick is strong, the number of direct inter-city passengers remains very low, to the extent that traffic on the central section is considered sparse.

The report suggests that by offering inter-city rolling stock with a facility for seat reservations, doubling the service to eight trains per day, and extending five services south to Cork, the line could achieve its full potential. The report does not shy away from suggesting closure of some routes where traffic is low, although it argues that this will allow resources to be redirected to areas where demand is greater. For example, if the Ballybrophy - Limerick service is cut back to Nenagh, it would be possible to run eight trains per day instead of five using the same rolling stock. Better-targeted services, and limited investments that reduce operating costs, such as the installation of automatic level crossings, are also put forward as alternatives to closure.

What is certain is that the modernisation of the network will be delivered under a different industry structure to the vertically-integrated organisation that exists at present. Last month the government announced it would not seek an extension of Ireland's derogation from European legislation on opening its rail market, which was due to expire next March. Transport minister Mr Leo Varadkar said on March 13 that consultation will be launched on the restructuring of IE, and the creation of a regulatory body to oversee capacity allocation and access charging.