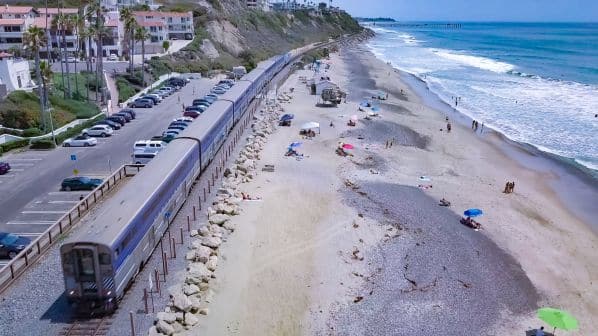 The station at San Clemente shows the vulnerability of the railway to the elements.
Photo Credit: Shutterstock

AMTRAK and Metrolink have suspended operation of passenger services between Irvine and San Diego “until further notice," due to safety concerns with the railway infrastructure in San Clemente following heavy rains from Tropical Storm Kay.

According to the Los Angeles - San Diego - San Luis Obispo (Lossan) Rail Corridor Agency, which manages the Amtrak Pacific Surfliner service on the route, consultations with geologists, geotechnical engineers and surveyors revealed that there may be safety concerns with a section of track in the San Clemente area. The Lossan agency decided to immediately stop operation on the route.

The Orange County Transportation Authority (Octa), which owns the section of route  in question, is conducting emergency maintenance to stabilise the formation.

Amtrak says the closure is a cautionary measure “to ensure the safety of our passengers and crews.” It says that regular service will resume once the repairs are completed.

Amtrak’s Pacific Surfliner trains that ran on October 1 and 2 terminated at Irvine. Further social media updates confirmed that replacement bus services would be available on the route to San Diego from October 3.

The 564km Lossan rail corridor runs from San Luis Obispo to Los Angeles and San Diego, and is the busiest state-supported inter-city route in the United States, carrying around 2.7 million passengers per year before the Covid-19 pandemic. Amtrak operates 12 daily Los Angeles - San Diego Pacific Surfliner trains on the route, which is also used by Metrolink and Coaster commuter trains and freight traffic.

Line improvements worth nearly $US 1bn are planned to improve capacity and resilience of the corridor, including providing double track on the section from Orange County to central San Diego.