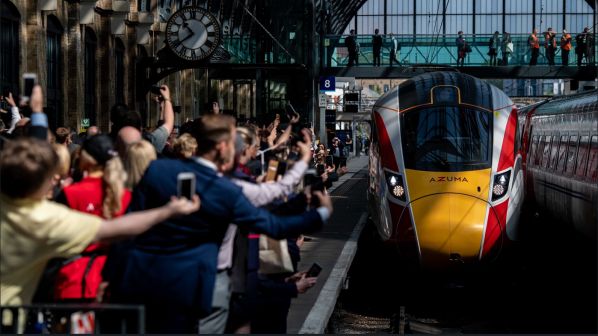 The 225km/h Azuma left King’s Cross at 11.03 and arrived in Leeds at 1321, with stops at Peterborough, Doncaster and Wakefield. The return journey from Leeds commenced at 13.45 and arrived in London at 1557, two minutes ahead of schedule.

Hitachi Rail Europe is supplying LNER with 10 five-car and 13 nine-car class 800 bi-mode trains, together with 30 nine-car and 12 five-car class 801 EMUs. Entry into service is five months later than planned due to signalling interference issues on the line and the entire fleet will be delivered over the next 12 months. Similar trains are already in service with Great Western Railway.

The fleet was procured by Britain’s Department for Transport under its Intercity Express Programme and is being supplied by Agility Trains, a consortium of Hitachi Rail Europe and John Laing, under a 27.5-year fixed-price train provision agreement.

The trains offer around 7cm more legroom and around 100 more seats than the 45 IC 225 and IC 125 trains, which the Azumas are replacing. Standard class passenger also benefit from what LNER describes as its fastest-ever at-seat Wi-Fi system, as well as a plug socket for each seat and blinds on every window. There is also a new traffic light seat reservation system above seats in standard and first class, while first class passengers benefit from larger tables, reclining seats and USB and plug sockets at every seat.

The Azuma fleet also boasts both a Let’s Eat Café Bar and an at-seat trolley catering service. Passengers in first class will receive a complimentary two-course meal freshly prepared in the onboard kitchen using locally-sourced ingredients.

The trains, which were developed in Japan, were assembled by Hitachi at the manufacturer’s Newton Aycliffe plant. Hitachi Rail Europe’s managing director, Ms Karen Boswell OBE, says more than 70% of the parts used have been sourced from areas surrounding the factory.