IRJ at InnoTrans 2016: Germany’s new open-access operator Locomore presented one of its refurbished locomotive-hauled passenger coaches as it prepares to introduce its first service linking Stuttgart and Berlin on December 14. 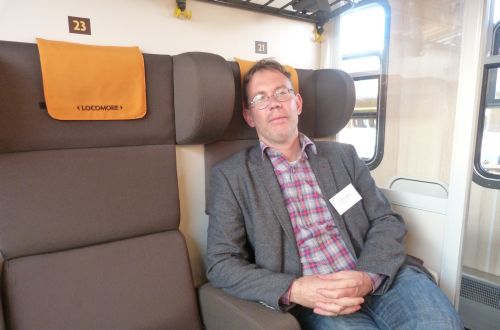 Locomore contracted Atelierele CFR Grivata, Romania, to refurbish a fleet of nine 200km/h saloon and compartment passenger coaches which were acquired from German Rail (DB) by SRI Rail Invest and rented to Locomore. The coaches have been equipped with Wi-Fi, power sockets, and vacuum toilets. Compartments have different colour schemes as they are themed for a variety of uses so passengers with similar interests can travel together. Hector Rail will provide the traction and drivers.

Locomore will operate a daily round trip initially and has secured a four-year contract for paths from DB Networks. It hopes to be able extend the service to Munich, and to start a second service from Bonn, via Cologne, Düsseldorf, Hannover, and Berlin to the Baltic resort of Binz.

“To be successful in open access, you need to have a good product,” Mr Derek Ladewig, Locomore’s founder, shareholder, and managing director, explained to IRJ on board his first coach. “You need to offer more than simply running from A to B.”

Locomore has used crowd funding as one of its methods of financing the project. “Crowd funding was a success and is still going on,” Ladewig said. “We have raised €600,000 so far which is a small amount for the railway industry, but it allows us to start talking to our customers early on. We will need as many customers as possible from the first day as we do not have anyone behind us to fund us, although this does make us independent.”