FRENCH secretary of state for transport Mr Alain Vidalies and the president of the region of New Aquitaine (Aquitaine, Limousin and Poitou-Charentes) Mr Alain Rousset announced on November 29 that the regional government will take control of three loss-making inter-city services from French National Railways (SNCF). 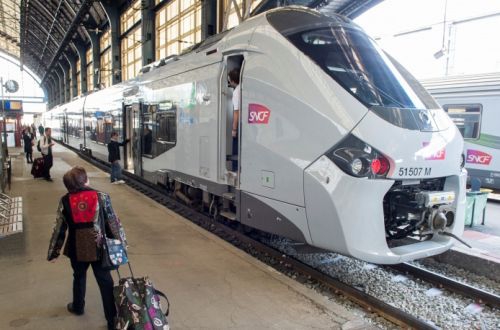 As part of the agreement the French state will fund the purchase of Alstom Régiolis trains for the three routes.
Photo Credit: SNCF

The Bordeaux - La Rochelle, Bordeaux - Limoges and Bordeaux - Ussel services are among the so-called Balance of Territory (TET) trains currently funded by the state and operated by SNCF.

Under the agreement, the French state will fund the complete renewal of rolling stock on these routes and five new Alstom Régiolis trains will enter service on the three lines no later than June 2019. The state will also make a contribution towards operating costs.

The proposals will be adopted by the regional government at a plenary session on December 19 and New Aquitaine will become the organising authority for the three services from January 1 2018.

Earlier this month the Grand Est region (Alsace, Champagne-Ardenne and Lorraine) agreed to take control of Reims - Dijon and Hirson - Metz services from January 1 2017, and Paris - Troyes - Belfort services from January 1 2018. The French government has agreed to contribute €13m per year towards the cost of operating Paris – Belfort services and a new fleet of 19 bi-mode Alstom Coradia Liner trains will be introduced on the route from next year.