BRITISH Infrastructure manager Network Rail has unveiled the new western concourse at King's Cross station in London, the terminus of the East Coast Main Line, and a major hub for transport during this summer's Olympic Games. 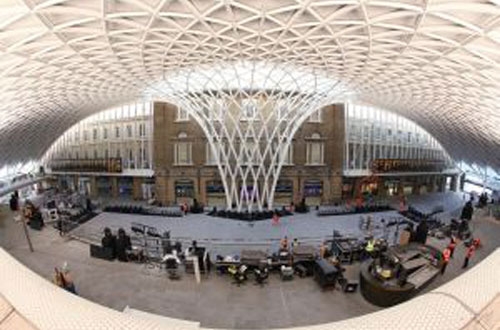 The £550m scheme has delivered what Network Rail describes as the biggest transformation in the 160-year history of the station, and includes a spectacular new roof structure which is designed to blend in with the station's heritage.
NR says the new structure have created a space that is three-times larger than the current concourse and have improved links to the London Underground network and neighbouring St Pancras station. Benefits to passengers include improved lighting, larger destination boards, clearer station announcements, and more shops and restaurants. The improvements will allow the existing concourse at the front of the station to be demolished and replaced by a public square.
"The stunning revitalisation of King's Cross station is set to play a vital role in the wider regeneration of this quarter of the capital," says London Mayor Mr Boris Johnson. "Together with the architectural marvel of St Pancras and an improved Tube station, we have created a stunning world class travel hub."
Over 1000 tonnes of steel, 1 million specially-made heritage bricks, 5 million ceramic tiles, and 5 million metres of cabling were used in the construction of the revamped station.
Categories: Main line, News
Tags: Britain, Network Rail