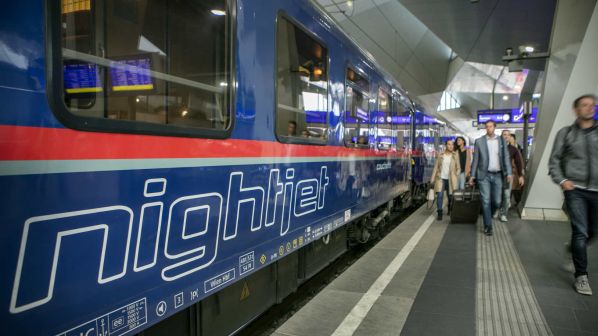 “In the past few months we have seen growth and so far this year we have achieved a 10% growth in passenger numbers compared with last year,” Matthä told IRJ. “We are looking at a reasonable economic result. I always say, one doesn’t get rich with night trains, but it is an important contribution to climate protection and, to be perfectly honest, it helps us with our public image.

“Also, we believe that with further expansion of night trains we can achieve better and stronger growth. In January 2020, we will start the Brussels service and in December 2020 we will go to Amsterdam. We don’t have precise figures yet, but on busy routes we are talking about 100,000 passengers per year as a typical number.”

Matthä believes overnight services are a viable alternative to short-haul flights. “You arrive comfortably and painlessly at a far-away destination, whether that might be Hamburg or Zürich or Brussels,” he says.

“And the so-called budget carriers are actually not so cheap, at the end of the day. But I would say that airlines are of course essential for long-distance travel, and as far as I know the airline industry is working on offering solutions. But undoubtedly on shorter and medium distances the train is the better choice. Travelling to Munich or Innsbruck [from Vienna] during the day I would take a train. To Dublin I would get on a plane.”

He also believes current concerns over climate change are benefitting rail. “The current public debate is playing into our hands, because here in Austria we are using 100% renewable energy, mainly hydro-electric and photovoltaic,” Matthä told IRJ.

When asked how Rail Cargo Group is performing this year, Matthä responded: “We are currently slightly above last year’s performance; we expect our revenue to be up from last year and our forecast today is for a positive result for the year.

“Generally, the margins are too small, and we are not in a position to make a profitable return on investment in the long run. There is tough competition with transit road freight, which effectively is co-financed by taxpayers to the tune of one third and we want to make this more apparent, as the railway system is completely self-financing, apart from a very small contribution [from the Austrian government].”

Regarding the Rail Freight Forward initiative, Matthä says: “We are strong supporters, but I must say that in Brussels we are in the phase of Sunday speeches and not Monday negotiations! This initiative is urgent and essential for rail freight: this means we need more modern infrastructure, better coordination between countries, better coordination of construction sites and a standardisation of technical norms. At the end of the day, it must become just as easy to transport goods by train as it is by lorry.

“We are making a big effort, but also for example our Belgian colleagues at Lineas are very active. Indeed many railways see things the same way as we do, as all of us analysed the situation and came to the same conclusion.”

The European objective is to achieve a 30% increase in rail freight by 2030. “We are ambitious to reach this goal,” Matthä says. “We have to work jointly with the European political system to achieve this target.”