NORWEGIAN infrastructure manager Bane Nor and contractors Strabag and Skanska celebrated the successful boring of the Mount Ulriken tunnel on August 29, a key part of the Arna - Bergen line revitalisation project. 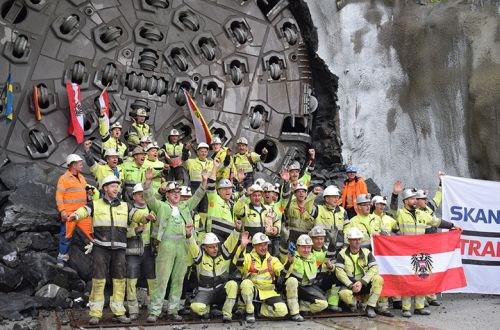 Work on boring the 7.7km tunnel began in January 2016 and it is the first in Norway to use a tunnel boring machine. The next step is to blow 16 crossings from the new to the old tunnel, and to fit out the tunnel ready for use by railway traffic.

The double-track tunnel is expected to carry its first train in 2020.

“This is a joyous day for us in Bane Nor,” says Ms Helga Nes, Bane Nor’s head of development. “Today's tunnel from 1964 is a bottleneck, and with the new tunnel we can double the capacity. This will give both passengers and freight traffic a lot better conditions.”