NS to introduce high-frequency services in 2017

NETHERLANDS Railways (NS) will introduce a high-frequency service on the Amsterdam - Eindhoven corridor and step up train frequency on other routes in December 2017. 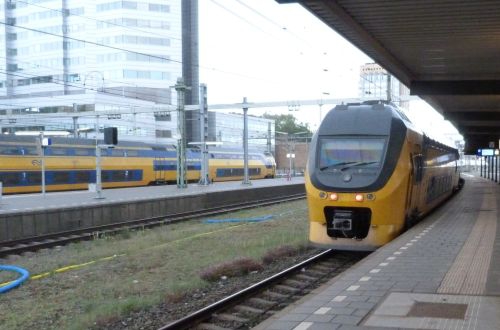 Utrecht Centraal is being remodelling to reduce conflicting train movements.

The number of inter-city (IC) trains will increase from two to six trains per hour per direction on the Amsterdam - Utrecht - ’s-Hertogenbosch - Eindhoven route, while the frequency of the Amsterdam - Utrecht – Arnhem - Nijmegen IC service will double to four IC trains per hour per direction, and the frequency of stopping trains will be stepped up in peak hours between Utrecht and Houten Castellum, a satellite town south of Utrecht.

The introduction of more trains is the first step of the the High-Frequency Rail Programme (PHS) which aims to provide train frequencies so high that passengers no longer need to consult a timetable. PHS will cover most lines in the west of the country and some peripheral corridors. Higher frequencies are needed to address overcrowding which has been a problem on some lines for a long time.

Dutch infrastructure manager Prorail has been expanding infrastructure capacity to enable the higher frequencies. This includes quadrupling the lines from Utrecht to Houten Castellum and west to Woerden.

Major remodelling is underway at Utrecht Centraal station, the most important junction on the network, and the station was closed for a nine-day period in July as part of this work. One of the key priorities is to separate fast and slow trains.

The station at ’s-Hertogenbosch has already been upgraded with the construction of flyovers, while at Geldermalsen Prorail plans to remodel the station to increase platform capacity and avoid conflicts between east-west Geldermalsen - Dordrecht trains and services on the north-south Utrecht - Eindhoven main line. This work could be completed in 2020 or 2021.