CZECH and Slovak open-access operator Regiojet is to set to launch Prague - Bratislava services with the start of the 2017 timetable on December 11, with trains running via Pardubice and Brno. 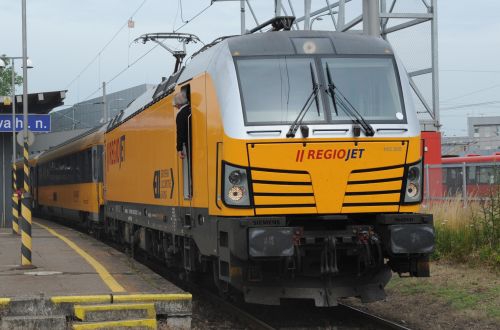 Both Regiojet and Czech Railways (CD) applied for the paths being used by the new services, with Czech infrastructure SŽDC ultimately ruling in favour of the open-access operator.

Prague - Bratislava is Regiojet’s second cross-border route between the two countries after Prague - Košice, which is served by two return services per day, one of which runs overnight.

From December 11 RegioJet will also operate a third service between Prague and Brno, which will run as far as Uhersko Hradíštĕ on the Czech-Slovak border.

Due to low demand, Regiojet is reducing the length of Prague – Haviřov services from nine to six coaches, which will release rolling stock for the Brno and Bratislava services. Traction will be provided by multi-system Siemens Vectron locomotives leased from ELL, which are equipped to operate on Slovakia’s 25kV 50Hz ac electrification system.

CD filed a legal complaint with the Czech rail regulator in August seeking to block Regiojet from operating Prague - Brno services, but the regulator has not reached a decision on the complaint. At the same time CD petitioned the Court of Justice in Prague to forbid SŽDC from allocating track capacity to Regiojet, but this request was rejected.