STUDIES are to commence soon on reopening two cross-border lines between southwestern Germany and eastern France. The lines would support new services as well as increase operating flexibility in the event of disruption on the one side of the border, as happened at Rastatt, Germany, last year. 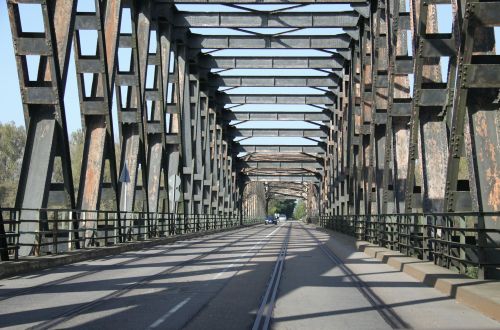 The bridge over the Rhine at Wintersdorf was converted for road and rail use, but trains no longer use it.
Photo Credit: Keith Fender

The Pamina Euro-district, which brings together several German local authorities in both Rheinland Pfalz and Baden Württemberg plus the Grand Est Region, Département Bas-Rhin and town of Hagenau in France, has agreed to undertake a feasibility study into the re-opening of the railway between Rastatt, Germany, and Hagenau, France. The line could be used by a new Saarbrücken - Hagenau - Rastatt - Karlsruhe passenger service as well as a diversionary route for freight traffic.

The 7km section from Rastatt to Wintersdorf, beside the Rhine, still exists and is owned by Karlsruhe area tram-train operator AVG. In France a short section remains in use to serve industrial sidings near the Rhine at Beinheim, but the 21.8km Rœschwoog - Hagenau section is disused and would need to be completely rebuilt. The old railway bridge across the Rhine is still in use as a road bridge, for cars and light vans. Two options are possible: reconstruction for rail use or construction of a new bridge.

Pamina also wants to reopen the Freiburg - Breisach - Colmar line around 100km to the south. While there are lines on both side of the Rhine, the cross-border section no longer exists so a new river crossing would be required.
Pamina plans to seek funding for the studies from the European Union’s Interreg programme which exists to stimulate cross-border cooperation and is funded by the European Regional Development Fund.