SWEDISH infrastructure manager Trafikverket held a ceremony to mark the completion of a three-year upgrade of the 2km railway between Stockholm Central and Stockholm Södra on August 17, one of the Swedish network’s busiest sections. 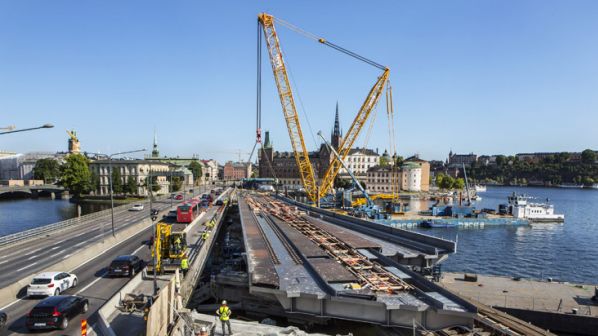 The three-year Getingmidjan, ‘wasp’s waist’ project involved eight-week closures of the link in each of the last three summers. Work focused on updating the entire infrastructure on the double-track line, which dates from the 1950s and will offer a further 80 years of life. This included replacing bridges over the Söderström River, connecting Södermalm with Riddarholmen last summer, and between Riddarholmen and Tegelbacken this summer.

In order to accommodate the closure of the link, the project included rebuilding the Älvsjö freight railway and Stockholm South station and the completion of the City Line 6km tunnel beneath central Stockholm in 2017 for use by all commuter traffic. This has helped to reduce the number of trains using the Getingmidjan to around 300 per day from 600 previously and eliminated the need to install a third track on the line.

“This is an important milestone and one of the largest investments we are making on the railway,” says Ms Lena Erixon, director general of Trafikverket. “The refurbishment has been absolutely necessary and is crucial for punctuality throughout the country to be improved, but also for us to be able to increase capacity for more travel and transport by rail.”

The line was closed on June 22 at which point contractors began dismantling the Norrströmsbron, cutting the bridge into 20 separate pieces to make room for the new bridge, which arrived on a barge from Tallinn earlier this year. Installation took place in two parts, with the 250m, 1700-tonne northern section followed by the 135m, 925-tonne southern section a week later.

New track, signalling and electrification was installed on the entire 2km stretch during the final three weeks of the shutdown along with new overhead contact rails in the tunnels beneath the Södermalm and Riddarholmen.

The first train operated on the new section on August 17 at 04.57. All main line services to and from southern Sweden, the most populous part of the countyr, pass through the Getingmidjan. Trains terminated at Stockholm Södra during the closure with passengers changing to Stockholm Transport (SL) commuter trains to continue journeys north.  Minor work will continue along the route until October 2021, including the installation of a new pedestrian and bicycle bridge at the end of the year.