THE president of the Italian region of Sardinia Mr Francesco Pigliaru and Trenitalia managing director Mrs Barbara Morgante signed a nine-year contract in Cagliari on July 26 for the operation of passenger services on the island’s standard-gauge network. 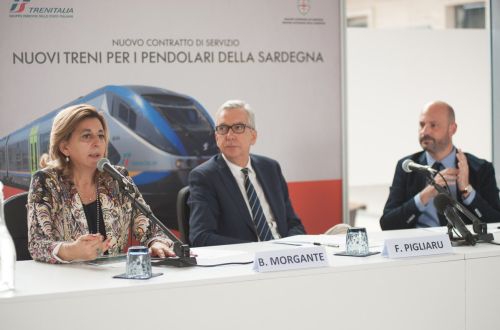 The contract, which runs until 2025, has a total value of €513m and calls for an investment of €123.4m, with €114m coming from Trenitalia and the regional government providing the remaining €9.4m.

The primary objective of this investment is the renewal of rolling stock, which will reduce the average age of the train fleet from 23.5 years in 2016 to around five years in 2021. Trenitalia will procure 10 Swing DMUs from Pesa, Poland, which will be delivered next year, and eight new-generation DMUs, which will arrive on the island in 2020-21.

The region will pay Trenitalia €43m a year to operate 3.7 million train-km annually, equating to around 180 trains a day serving 43 stations.

The performance-based contract sets new quality parameters for punctuality, cleanliness, and comfort. Trenitalia says punctuality has risen to 90% in recent years and customer satisfaction improved by 6.1% between 2014 and 2017.