BRITAIN’s Windsor Link Railway (WLR) has formed a consortium to submit a market-led proposal to construct a rail tunnel in Windsor west of London to deliver a through railway connecting the South Western and the Great Western main lines. 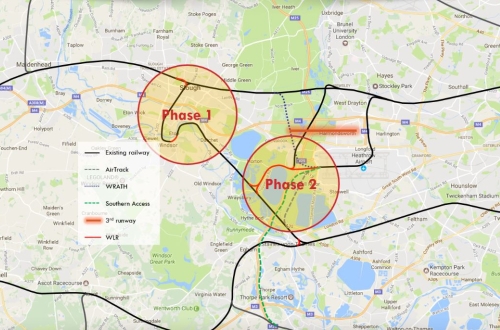 The proposed project would be constructed in two phases.

The proposal was submitted on July 31 as part of the Department for Transport’s (DfT) call in March for ideas for market-led proposals to enhance the railway, which would need to be financially viable without government support.

Phase 1 of the proposed project would see the lines connected through a tunnel and would also see the reconstruction of a triangular junction at Slough.

WLR says phase 2 would connect Heathrow Airport to the Staines - Windsor Line with a triangular junction at Wraysbury and a similar junction near Staines on the Waterloo to Reading Line to the south, which could provide both western and southern access from Reading, Woking and Guildford to the airport.

European infrastructure investment fund Meridiam has joined the consortium and, subject to receiving satisfactory government approval, says it will finance its equity element of scheme through to completion.

“We have successfully campaigned for the new government policy to recognise privately-promoted railways,” says managing director and founder of WLR, Mr George Bathurst. “We now look forward to the government’s response after the summer and working with them to develop it further. If accepted, this will be the first new railway not requiring net funding from government over its lifetime, since the days of the original railway companies. This market-led approach, being promoted by the secretary of state, is the future of our railways and will ultimately replace the current franchise system, leading to lower fares and more reliable journeys.”