THE minister of transport for the German state of Lower Saxony, Mr Olaf Lies, marked the start of construction of stations on the Neuenhaus- Bad Bentheim line on September 5 by handing over the contract for future regional passenger operations to Mr Joachin Berend, managing director of Bentheimer Eisenbahn (BE). 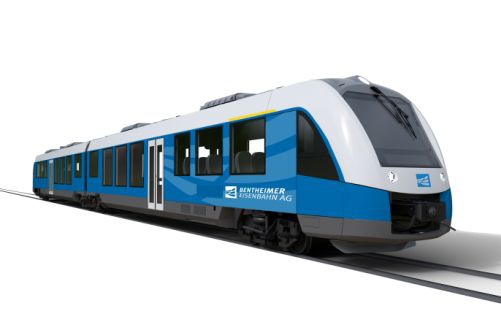 BE has ordered five two-car Coradia Lint DMUs from Alstom.

BE’s passenger services on the 28km line, which runs adjacent to the Dutch border, were replaced by buses in 1974 and since then the link has only carried freight traffic. However, a €19.6m upgrade programme is now underway which will reinstate stations at Neuenhaus and Bad Bentheim as well as restore services at Nordhorn.

The operations contract will come into force in December 2018 and will last for at least three years, with one train per hour set to be offered on the route which will be served by a fleet of Alstom Coradia Lint DMUs.

BE placed a €20m order with Alstom Germany in January for five two-car vehicles which will have capacity for 248 passengers and will operate at up to 80km/h, offering a journey time of 30 minutes between Neuenhaus and Bad Bentheim. Delivery will take place in autumn 2018 and the DMUs will be maintained at BE’s Nordhorn Süd depot, which is also being upgraded.

The state of Lower Saxony is funding 75% of the rehabilitation programme with the remainder coming from BE and municipalities along the route that will benefit from the reintroduction of rail services.