THE Slovakian Ministry of Transport has selected a joint offer by national passenger operator ŽSSK and Austrian Federal Railways (ÖBB) to replace RegioJet as the operator on the 100km unelectrified Bratislava - Komárno line. 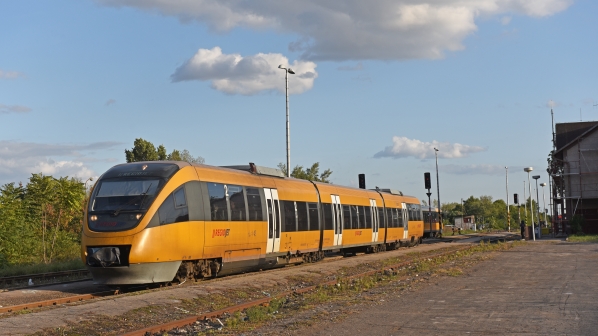 RegioJet has operated services on the line for the past 10 years.
Photo Credit: Quintus Vosman

The line is currently RegioJet’s only PSO contract in the country, with the new operators due to begin a two-year contract from the December 2020 timetable change.

The Ministry of Transport says it decided to “merge two stable national carriers,” which it says will provide a better service at a lower price. The total annual subsidy will reduce by nearly €200,000, with an average rate of €9.65 per train-km.

The existing timetable will remain in place with slight modifications to optimise station dwell times.

An offer from RegioJet was turned down by the Ministry of Transport. The private operator had offered to provide services with the existing fleet, which comprises three-car Talent DMUs, former German Rail (DB) class 628 DMUs and ER20 diesel locomotives hauling double-deck coaches. The operator also offered to install air-conditioning across its fleet.

However, it also requested a 10-year contract and time to modify its rolling stock.

RegioJet has operated services on the line for the past 10 years, with passenger numbers increasing in response to the introduction of modern rolling stock.

The Ministry of Transport initially launched a tender for a 10-year contract to operate services on the line, starting on December 31 2019, but did not receive any bids. In March, the ministry launched another tender for a two-year contract, with conditions that could only be met by the national railway.

The ministry has announced the launch of a ‘transparent’ tender for a 10-year contract, which will launch in 2023.