THE New South Wales state government has awarded Systems Connect, an unincorporated joint venture between CPB Contractors and UGL, an $A 1.38bn ($US 998.2m) contract for major infrastructure works associated with the extension of the second stage of the Sydney Metro project from Chatswood to Bankstown. 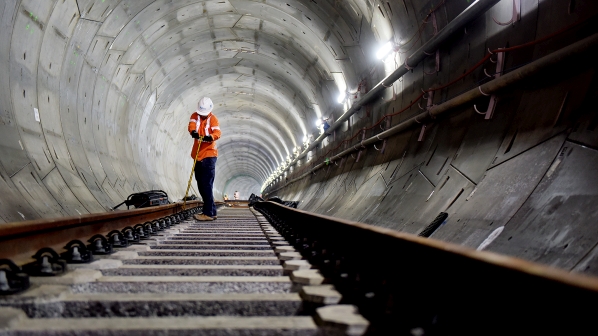 “Due to the massive scale of the Sydney Metro City & Southwest project, the final contract value may vary due to ongoing fine-tuning and optimisation involving the 14 other major contracts,” says transport and infrastructure minister, Mr Andrew Constance. “This is the seventh Sydney Metro City & Southwest contract to be awarded and the overall project budget range has been set at between $A 11.5bn and $A 12.5bn.”

The second of five tunnel boring machines (TBM) has recently started tunnelling under Sydney to deliver a total of 31km of tunnels between Marrickville and Chatswood for the Sydney Metro.

The two TBMs are currently constructing 8.1km of twin tunnels from Marrickville to the new Sydney Metro station sites at Waterloo, Central, Pitt Street, Martin Place and on to Barangaroo.

Two more TBMs will excavate 6.2km from Chatswood to the edge of Sydney Harbour, while a fifth machine has been specially designed to deliver the twin tunnels under Sydney Harbour.

The initial 36km Metro North West line from Rouse Hill to Chatswood is expected to open in the second quarter of next year. The South West extension of the Metro, which will replace the existing heavy rail link to Bankstown, is due to open in 2024.