THE 11km North-South metro line in Amsterdam will finally open on July 22, 15 years after work began on the €3.2bn project and more than a decade after it was due to open, although the project still requires the authorisation to place in service by Amsterdam municipality. 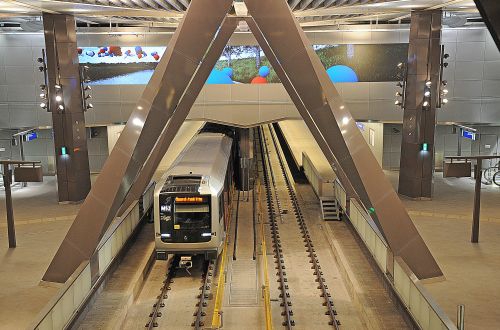 The North-South Line is the second heavy-metro underground line to be constructed in Amsterdam and has 6km of tunnels, 4km of which are 20m deep. Construction started on the project in January 2003, and tunnel boring began in March 2010 and was completed in February 2012. Track laying started in November 2012 and finished in July 2015. Station finishing works took place between November 2011 and January 2017 allowing testing and commissioning to start. Trial operation will start soon with passengers on board, and 16,000 people have already registered as test passengers and another 8000 are needed.

The new line starts at North station and crosses beneath the IJ waterway to reach Central station where it connects with the existing metro, tram and mainline service. The line then heads south beneath the city centre to Amsterdam South, where there is another connection with urban and mainline rail services.

The line has seven new stations, while an eighth station has been prepared for opening at a later date. Construction was complicated by the poor ground conditions, the large number of waterways in Amsterdam and need to protect buildings in the historic city centre. There was also a precondition that buildings could not be demolished.

Initially, trains will operate at 6-minute headways as capacity is limited due to the availability of only one track at Amsterdam South station. The opening of the line will also herald extensive changes to bus and tram services in Amsterdam.