CRRC has failed to establish a local manufacturing plant to produce 192 cars from order for 216, putting completion of the order in jeopardy. 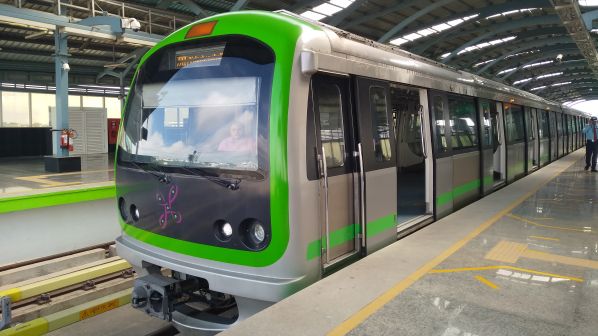 DELIVERY of the first lot of metro cars for Bengaluru Metro Phase-2, which was scheduled for June, has been delayed as CRRC has failed to either set up a manufacturing facility in India or find a local partner to assemble, test and commission the trains.

CRRC was awarded the Rs 17.6bn ($US 240m) contract to supply 216 metro cars in December 2019. Bengaluru Metro Rail Corporation Limited (BMRCL) plans to operate 121 of the new cars on the Purple and Green lines and the remaining 95 on the RV Road - Bommasandra line, which is currently under construction.

According to the agreement, 24 cars would be shipped from China, with the remaining 192 manufactured in India at a planned facility in Sri City, Andhra Pradesh state.

However, construction of the plant is running 12 months behind schedule, and BMRCL officials fear that it may have to accept extra imports from China to meet project deadlines.

BMRCL has reportedly rejected an offer from CRRC to manufacture all 216 cars in China. BMRCL fears that additional imports would impact pricing, while the contractual agreement itself would need to be re-negotiated to the detriment of the Indian government's “Make in India” initiative, which encourages global companies to invest and manufacture in India.

BMRCL also fears that CRRC would fail to adhere to the technical specifications contained in the contract if all the trains are manufactured in China where only two types of metro train are used.

Local reports reveal that the Chinese company has not acquired the required land in Sri City for the new plant, while various formalities including forest clearance permits were not obtained until January. Reports also indicate that motivation of Chinese companies to localise content for international contracts is low. All the 381 metro cars CRRC manufactured for India from 2008 to 2020 were assembled in China.

BMRC has slapped several notices on CRRC in recent weeks and even threatened to cash the company's bank guarantee of Rs 3.7bn, officials said. CRRC has already commenced legal proceedings to block such a move.

“There are issues concerning tender conditions, which will now be sorted out in court,” says BMRCL managing director, Mr Anjum Parwez. A CRRC India official refused to comment when approached by IRJ.

“We are discussing contractual issues, but cancellation of the contract is not an option, as such a step would entail legal complications,” added BMRC spokesman, B L Yashwant Chavan.

While CRRC does not yet possess a manufacturing facility for metro trains in India, it does manufacture traction motors and alternators for locomotives at a facility set up in 2015.