THE Donghae Line in Busan, Korea, opened on January 3, bringing the total number of lines on Busan’s metro network to six. 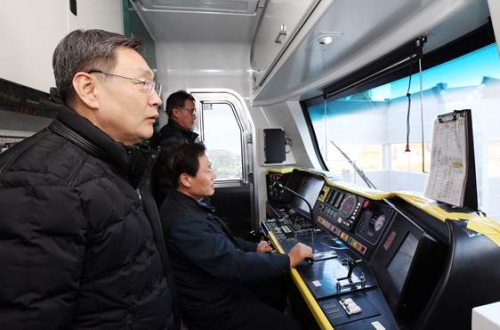 The new line is the first stage of a metro connection between the coastal cities of Busan and Ulsan, and stretches from Bujeon station to Ilgwang station in Gijang county. The 28.5km line has 14 stations, including transfer points to Line 3 at Geoje, Line 1 at Busan National University of Education and Line 2 at Bexco.

The route is the first of its type outside of the Seoul Capital area as it shares track with inter-city trains. In 2013, track doubling and electrification of the route was completed, including the replacement of a 12.5km section of single track along the coast.

The opening of the Donghae Line makes travel more convenient for residents of Gijang County and commuters in the south-east of Busan, and it is hoped it will also stimulate development of surrounding areas and reduce traffic congestion.

The next phase of the line from Ilgwang to Taehwagang is scheduled to be completed in the second half of 2018, taking the total length of the line to 65.7km with 22 stations.