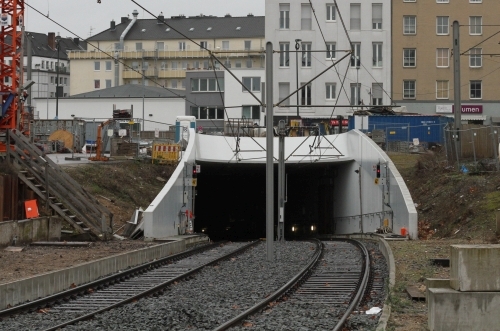 The line was built by the City of Düsseldorf with funding from the state of North Rhine Westphalia and the German federal government. It replaces former tram street running on the core section through the city centre, providing connections with existing underground light rail lines at Heinrich Heine Allee station. The tram street running sections replaced by the new line will be removed.

The Wehrhahn Line was planned as part of a network of new underground routes for Düsseldorf in the 1970s and the first construction work - the 200m station box below the other underground light rail routes at Heinrich Heine Allee station - was built in the early 1980s. Final planning approval for the construction of the line was granted in 2007. Tunnel boring machines were used to excavate the single-bore tunnel under the city centre from 2008 to 2012.

More than 53,000 passengers are expected to use the new line daily. Siemens has supplied 76 NF8U trams to operator Rheinbahn to replace older vehicles and these will also operate elsewhere in the city. The light rail network serving Düsseldorf has been revised as a result of the new line opening: four U-Bahn lines replacing former tram routes will use the Wehrhahn line.