THE first of 52 Azur metro trains being supplied to Montreal Transport (STM) by Alstom and Bombardier entered passenger service on the Orange Line of the Montreal metro on February 7, coinciding with the 50th anniversary of the metro. 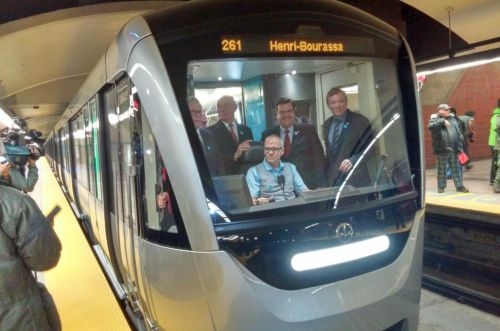 The first completed train was presented to officials from Quebec province and the city of Montreal at Bombardier's La Pocatière plant in Quebec on November 25 2013 prior to the start of testing. The first train will be tested in passenger service for a minimum of 61 days and will be monitored continuously by a dedicated crew.

A second train is being tested without passengers on the Green, Yellow and Blue lines. Once STM is satisfied with the performance of these trains, delivery will start of the remaining 50 trains and will continue until 2018.

The introduction of the nine-car rubber-tyred trains will allow STM to gradually withdraw its fleet of MR-63 trains, which date back to the opening of the first phase of the network in 1966. The new trains are designed to accommodate 8% more passengers than the MR-63s and have wide inter-car gangways.

Bombardier is leading the project and is responsible for design, engineering, production and final assembly, while Alstom is supply the bogies for the 468 cars, automatic train control, communications, passenger information, and video surveillance.