THE first Nippon Sharyo metro cars for the initial phase of the Jakarta MRT project were unloaded at the Indonesian port of Tanjung Priok on the evening of April 4 after completing their sea voyage from Japan. 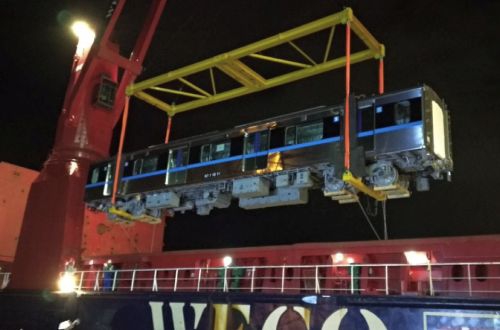 The initial consignment comprises two complete six-car trains, which will be moved by road from the port to the MRT Line 1 depot Lebak Bulus.

MRT Jakarta signed a Rupiah 145.5bn ($US 110m) contract with Nippon Sharyo and Sumitomo Corporation in March 2015 for 16 metro trains, which are being built at Nippon Sharyo’s Toyokawa plant.

The fleet will be used on the 15.7km north-south Line 1 from Hotel Indonesia Roundabout to Lebak Bulus, which is due to open in February 2019. MRT Jakarta says construction was 92.5%-complete on March 25.

MRT Jakarta expects to break ground in December on the second phase, which will extend the line 7.8km from Hotel Indonesia Roundabout to Kampung Bandan station in North Jakarta. Phase 2 will add eight underground stations to Line 1.