THE Danish government reached an agreement with Copenhagen City Council on May 15 to construct two extensions of the city's automated metro network. 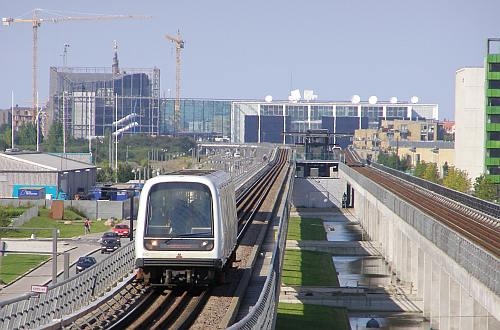 The two extensions will be branches off the Cityring circle line, which is currently under construction and due to open in 2018 and both will become part of Line M4.

The Sydhavn line will branch off the Cityring at Sønder Boulevard, utilising part of the link to the new depot before continuing along the harbour front to reach an interchange with S-Train and mainline services at Ny Ellebjerg.

The government´s main interest in the metro line is that it will relieve congestion at Copenhagen Central by way of this interchange, allowing new and diverted regional services from the west to run to the airport via the existing freight link to the Øresund line, avoiding Copenhagen Central. The city council is keen to see the line go ahead because it will pass through the city's disused southern docks, which are now undergoing redevelopment. Three of the line's four stations will be situated in this area.

Like the Cityring, most of the line will run in bored tunnels, with a short section of surface line on the approach to Ny Ellebjerg.

To the north, a second branch will leave the Cityring near Østerport station and run north to serve the Nordhavn development area. This is likely to reach the recently-opened cruise ship terminal, which currently lacks good transport links to the city centre. This line will mostly run on viaduct.

The initial 3km section to Orientkaj and Nordhavn has already been approved and construction is expected to begin soon.

Both extensions are due to be fully operational by 2023.