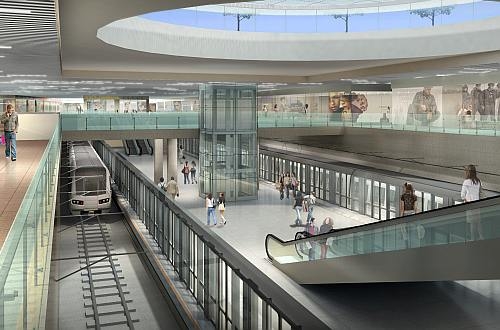 THE Management Authority of Urban Railways in Ho Chi Minh City has reported that the city’s first metro line is 91% complete.

Trial operation on the 20km Line 1, also known as Red Line, are due to begin later this year with a view to starting revenue service by the end of 2023.

Line 1 has been under construction since 2012, and 17km of elevated alignment has been completed from Ba Son to Binh Duong province.

Work continues on the underground section between Opera House and Ben Thanh, due to become the city’s main transport hub. Completion is expected in September.

The remaining underground section of Line 1, running between Opera House and Ba Son, is due to be completed before the end of 2022.

Line 1 will serve a total of 14 stations, three of which are underground.

The route will be operated by a fleet of 17 trains being supplied by Hitachi, which will be capable of running at up to 110km/h on elevated sections.

Japan International Cooperation Agency is providing 83% of the $US 2.5bn cost of Line 1, with the rest provided by the city government.

Nippon Koei Group has acted as main designer and consultant for Line 1. The elevated sections have been built by a joint venture between Sumitomo and Vietnamese state-owned contractor Cienco 6.

The underground section is being built by a joint venture between Shimizu and Maeda of Japan.

Line 1 is the first project in a $US 13bn mass transit programme to ease congestion in Ho Chi Minh City, home to 10 million people.

The city government is planning to build a further eight metro, monorail and light rail projects, with work due to begin this year on Line 2, also known as the Yellow Line.