THE first phase of the metro network in the Indian city of Kochi was inaugurated by Indian prime minister Mr Narendra Modi on June 17. 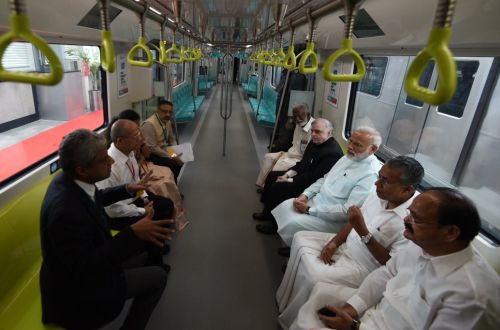 Commercial operations began on the 13.3km northern section of the Rs 55.4bn ($US 860m) Phase 1A from Aluva to Palarivattom on June 19. The line runs on an elevated alignment for its entire length and serves 11 stations. The remaining 14km section of Phase 1A will continue the line south to Tripunithura, with the Palarivattom - Maharaja's College stretch expected to open in August.

Phase 1B, an 11.2km branch from Jawaharlal Nehru Stadium to Infopark 2, was approved by the Kerala state government in 2015.

Alstom has supplied 25 three-car Metropolis trains for Phase 1A. The 2.9m-wide 65m-long air-conditioned trains accommodate 975 passengers, 140 of them seated. Under the government’s Make in India initiative the trains were designed by Alstom in Bangalore and built at the company’s Sri City plant in Andhra Pradesh.

In addition to rolling stock, Alstom supplied its Urbalis 400 CBTC solution as well as telecommunications, 750V dc third-rail electrification, and Scada for the project.