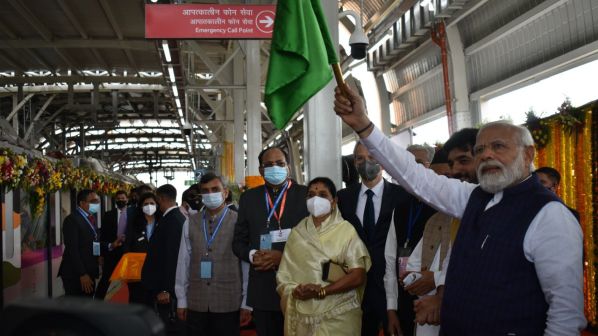 The inaugural train operated on a 5km section of the Aqua Line from Garware College to Vanaz, which has five stations. The elevated Aqua Line will eventually be 15.7km-long with 16 stations, running from Vanaz to Ramwadi, with a maintenance depot at Hill View Park.

Operation also began on a 7km section of the Purple Line from Pimpri-Chinchwad Municipal Corporation (PCMC) to Phugewadi, which has five stations. When complete the Purple Line will be 16.6km-long, running from PCMC to Swargate, with 14 stations. 6km of the line will be underground, with the rest elevated.

The 23.3km Line 3 which will run from Rajiv Gandhi Infotech Park to Balewadi is yet to open. This will be completely elevated and feature 23 stations. This line was the first project in India developed as a public-private partnership (PPP) under the government’s New Metro Policy, which was announced in 2017.

The Maharashtra Metro Rail Corporation (Maha Metro) is planning to complete all three lines by December.

The 34 three-car trains for the network were built by Titagarh Firema, with the first delivered in late December 2019. Alstom has supplied its Urbalis 400 CBTC system for the two lines currently operating.