MALAYSIA's prime minister Mr Najib Abdul Razak officially opened the latest additions to Kuala Lumpur's steadily growing rail network on June 30, a 17.4km extension of the Kelana Jaya Line and a 6.6km extension of the Ampang Line both of which terminate in Putra Heights. 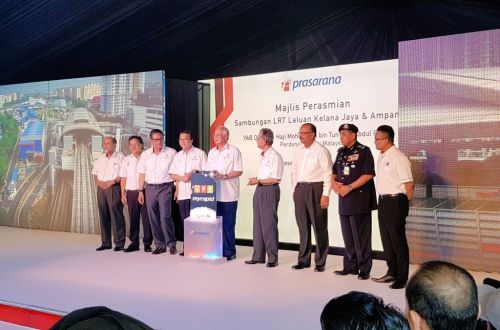 Operations commenced at 06.00 on the Kelana Jaya line extension which adds 15 stations to the network from its previous terminus at Kelana Jaya and now offers a through service on the 46.4km route from Gombak to Putra Heights. Similarly the Ampang Line is extended by 6.6km and three stations from its terminus at Bandar Puteri, which opened on March 31 following the completion of the second 6.5km stage of an 18.6km extension of the original 27km line. The first phase, the 5.5km stretch from Sri Petaling to Kinrara BK5, opened on October 31 2015.

Both extensions, which were budgeted at a combined Ringgits 7bn ($US 1.74bn), bring rapid transit services to the southwest of KL for the first time and establish Putra Heights as a southwest transit hub. According to Prasarana, the Kelana Jaya Line is expected to serve 170,000 extra passengers daily, while the Ampang Line will serve 130,000, offering much-needed congestion relief to the city.

Prasarana says it has developed 2200 car parking spaces at stations along the Kelana Jaya extension to encourage people to switch to the train and is also offering 30 feeder buses operating at 10-15 minute frequencies on 10 routes between Lembah Subang and Putra Heights.

Expanded services on the Kelana Jaya Line will be served by a fleet of 14 four-car driverless trains from Bombardier, which will enter service in January 2017. With capacity limited, initially peak services will terminate at Ara Damansara Station in order to offer a regular service to the city centre. For the Ampang Line, CRRC is supplying 20 Amy Trains, which were due to be introduced for the start of services to Putra Heights. A further order for 30 trains will replace the line's existing fleet which entered service in 1996.