CANTON Vaud Directorate-General for Mobility and Transport has awarded two contracts to support the planned expansion of the Lausanne metro network, which is being carried out as part of the Strong Public Transport Corridors (AFTPU) programme. 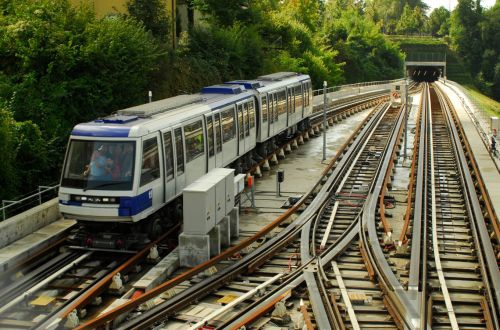 The project will address the urgent need for more capacity on Line M2, which has a design capacity of 25 million passengers but carried 28 million passengers in 2014. New rolling stock is being acquired for the line and a second tunnel will be constructed between Grançy and Flon, which will make Line M2 double-track for its entire length. The tunnel will include a new station beneath the Swiss Federal Railways (SBB) station, which is being redeveloped as part of the Léman 2030 project.

The new tunnel is due to be completed in 2023. The existing tunnel will be retained to enable the operation of a three-minute interval shuttle between Lausanne SBB station and Flon. This will increase capacity on the core section of Line M2 to 11,700 passengers per hour per direction.

The AFTPU also includes the new Line M3, which will run north from Lausanne SBB station to serve the city’s airport at Blécherette. The 4km branch will serve seven stations and is due to open at the end of 2025.

A contract to provide engineering services for railway equipment has been awarded to a consortium led by BG Ingénieurs Conseils, Switzerland, which includes Egis Rail and Geste Engineering.

A contract for cross-disciplinary engineering services for the design, construction and commissioning of the metro system has been awarded to a consortium of Egis Rail and BG. This encompasses systems architecture, specialist engineering (including rolling stock and automation), and operations management, as well as preliminary operations and maintenance procedures.