TRANSPORT for London (TfL) launched a public consultation on February 9 on locations for stations and access shafts for the proposed extension of London Underground’s Bakerloo Line to Lewisham. 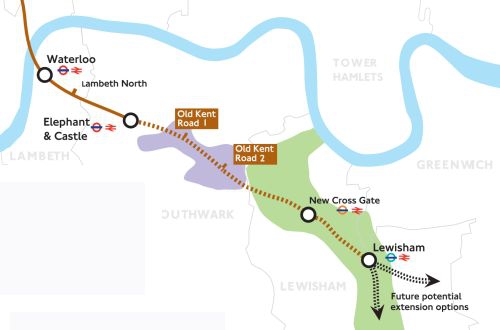 Running in twin-bore tunnels for its entire 7.5km length, the extension will continue the Bakerloo line beyond its current terminus at Elephant & Castle, where there will be a new ticket hall and platforms and improved interchange with the Northern Line. Two stations will be constructed on Old Kent Road in an area of the city that is not currently well served by the rail network. The public consultation is seeking feedback on two options for each of these stations.

The line will then continue southeast into the borough of Lewisham, serving an interchange with London Overground and suburban services at New Cross Gate before reaching the terminus at Lewisham, where it will connect with main line services and the Docklands Light Railway.

An initial public consultation was carried out in 2014 and attracted more than 15,000 responses. Further development of the proposals for the Lewisham extension was approved by the TfL Board and the mayor of London Mr Sadiq Khan in December 2016 and the project has been allocated funds in TfL’s business plan. Khan has committed to bringing forward the completion of the project from 2030 to 2028 or 2029, coinciding with the completion of the modernisation of the Bakerloo Line.

The extension would have capacity for around 65,000 passengers per direction per hour with services operating at 2-3 minute intervals at peak times. The journey time between Lewisham and Oxford Circus station in central London would be around 21 minutes.

For detailed data on urban rail projects around the world, subscribe to IRJ Pro.