THE mayor of Moscow, Mr Sergei Sobyanin, opened a 4.5km extension to Line 12 of the Moscow metro on February 27 during a ceremony attended by two of the city's deputy mayors, Mr Marat Husnullin and Mr Maxim Liksutov, and the head of Moscow Metro Mr Ivan Besedin. 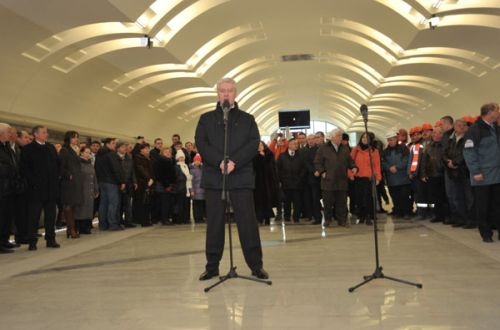 The mayor of Moscow Mr Sergei Sobyanin at the opening ceremony.

Construction of the two-station extension started in 2011 and Sobyanin says the project established a record for metro construction in Moscow by only taking two and half years to complete.

The extension runs from Ulitsa Starokachalovskaya (where the line interchanges with Bul'var Dmitriya Donskogo station on Line 9) via Lesoparkovaya to Bitsevskiy Park to connect with Novoyasenevskaya station on Line 6. Moscow Metro says that by having an additional connection with Line 6, the extension will help to relieve congestion on the southern section of Line 9.

Line 12 is now 10km long with seven stations and opening of the extension will improve transport links for around 300,000 people living in the area. Lesoparkovaya will become a transport hub with park-and-ride facilities and connecting bus services.