A CEREMONY was held in Milan on February 5 to mark the inauguration of the initial phase of the city's first driverless metro line. 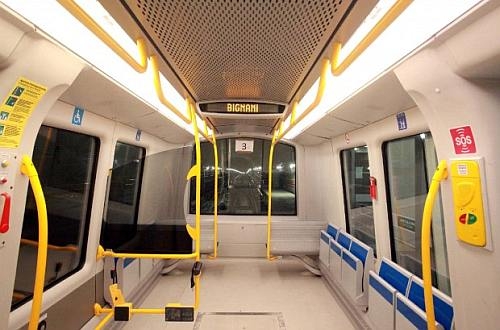 Commercial services will start on February 10 on Line M5, which runs for 4.1km from Bignami to Zara with seven stations. The 1.9km second phase will extend the line south from Zara to Isolo and Garibaldi by the end of the year, and a further 7km extension to San Siro Stadium will open in time for the Expo 2015 exhibition, which will be hosted by the city. The journey time between Bignami and San Siro will be 26 minutes.

The total cost of the project is around €500m, of which €257m came from the Italian government, €191m from the concessionaire, and €53m from the city council.

The design-build-operate concession was awarded to the Metro 5 consortium, which has funded around 40% of the project and will manage the line for a period of twenty-seven years. Consortium members include Ansaldo STS (24%), Astaldi (23.3%) ATM (20%), Torno Global Contracting (15.4%), Alstom (9.4%), and AnsaldoBreda (7.3%).

The whole line will be operated from a single control centre located in the depot at Bignami. The line has a fleet of 10 four-car AnsaldoBreda trains, which are 48m long and 2.65m wide. Each set accommodates 536 passengers, 72 of them seated, with two wheelchair spaces. The commercial speed of Line 5 is 30km/h and the minimum peak headway is three minutes, increasing to four minutes during the day and six minutes at night and during public holidays.

At just 50m, platforms are less than half the length of those on the first three metro lines. However, despite the modest dimensions of the trains, the automation of the line means it can carry up to 24,000 passengers per hour.

Two further extensions are proposed, which would take the line west to Settimo Milanese and north to MonzaBettola, an interchange with Line M1.