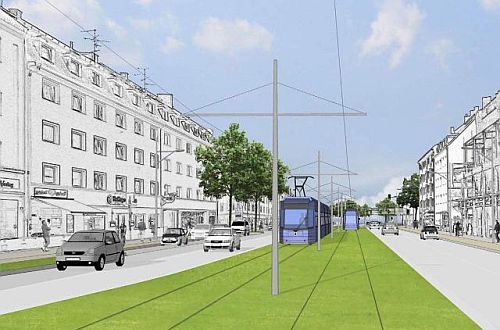 Artist's impression of the West Tangent tram line in Munich.

“The entire expansion will create almost 40km of new routes and expand the rail network by about 20%, so we are well on the way to making mobility in our city sustainable in the future for our citizens,” says Mr Dieter Reiter, the lord mayor of Munich.

The biggest metro project is the new north-south Line U9, which is designed to relieve congestion on parallel lines. Line U9, which is expected to take 10 years to construct, will run from Nordfriedhof on Line U6 south via Münchner Freiheit and Pinakothekenviertel to link up with a branch running south from Theresienwiese on Line U2. The line would then run south via the Main Station, Wiesenbahnhof, and Poccistrasse to Implerstrasse on lines U3 and U6.

An extension of Line U4 from Arabellapark to Englschalking on S-Bahn Line S8 is already in the planning phase, while the possibility of a further extension towards the fair will be kept open.

Line U5 is already being extended west from Laimer Platz to Pasing, but now a further extension via Westkreuz on S-Bahn lines S6 and S8 to the Freiham development area is also being planned. According to initial estimates, the extension could go into operation between 2035 and 2040.

Two important projects are planned in the north of Munich. The proposed U-Bahn Line U26 would provide a link from Am Hart on Line U2 via Heidemannstrasse to Kieferngarten on Line U6, but will only built after Line U9. Preliminary planning has been underway for some time for a northern extension of tram Line 23 from Schwabing Nord to Heidemannstrasse, and a decision on the final alignment is expected in 2019.

Plans are well advanced for a new tram line from Elisabethplatz on the new Line U9 east via Giselastrasse and the English Garden to Tivolistrasse, and a decision on the alignment is expected in the second half of 2019.

In the middle of this year, Munich intends to seek approval from the Upper Bavarian government for the West Tangent tram project. The 9km line would run from Romanplatz south via Laim and Laimer Platz to Aidenbachstrasse. The West Tangent line would take around three years to construct and could open in 2026.