CHINA has celebrated a flurry of new line openings in the past few days coinciding with the 70th anniversary of the founding of the People’s Republic of China on October 1. 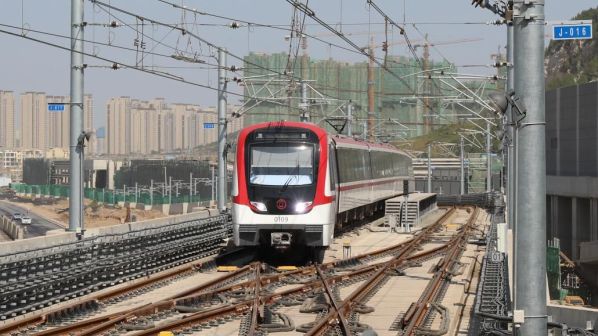 Among the highlights is the opening of the first line of a new metro in Xuzhou, Jiangsu province, on September 28.

Construction on the 22km east-west Line 1 began in February 2014 and is estimated to have cost Yuan 16.3bn ($US 2.28bn). The line, which has 18 stations, runs underground for 21.1km from Xuxhoudong Railway Station and on an 900m elevated alignment to the western terminus station at Luwo.

Tests of the system took place from September 20-22, during which 236,600 passengers used the line with no incidents reported. Tickets are priced at Yuan 2-5, and the service will operate from 06.00-21.30 at eight-minute intervals at peak times and 9min 40s off-peak. The complete journey takes 40 minutes.

CRRC Nanjing has supplied a fleet of 23 six-car Type B trains each with capacity for 2146 passengers. The manufacturer is also set to supply further trains for Line 2, the 24.2km link with 20 underground stations, which is scheduled to open on October 1 2020. The city is also developing the 18.3km Line 3, which will have 16 underground stations and run from Daqing in the Northeast to Gaoxin Qu Nan in the south, which is scheduled to open on June 30 2021.

In Xi’an in Shaanxi province, the 29.3km Airport Intercity Line opened to passengers on September 29. Running from the airport in the northwest of the city, the line runs southwest to Beilkezhan Beguangchan and Xi’an North station, interchanging with metro lines 2 and 4. The line has 10 stations, including seven underground.

In addition, Xi’an opened a 6.1km underground extension to metro Line 1 on September 26. The line runs from the current terminus of the existing 25.4km line at Houweizhai west to Weihe Forest Park, adding four stations. Construction on the project began in December 2015 and the line is the first to connect Xi’an City with Xixian New District, and is considered a major milestone in efforts to integrate the two cities. Trains will operate between 06.00 and 23.30 on the line with 38 services operating every day with a minimum headway of three minutes.

In Wuhan a 16km extension of Line 4 from Huangjinkou to Bolin opened on September 25. The Caidan Line adds nine stations, including seven underground, extending the total length of Line 4 to 48.6km and 37 stations. The line is served by six-car Type B trains.

A 5.2km extension of Line 1 opened in Wuxi on September 28. The line runs from the previous terminus of the 29.4km line at Changguangxi to Nanfangquan, adding three stations and taking the total to 27.

The first extension to Shenzhen Line 5 since the 40km line opened in June 2011 opened on September 28. The 7.6km link runs from the previous terminus at Qianhaiwan to Chiwan, adding five stations. The line is the first to serve the Qianhai Shekou Free Trade Zone in the southwest of the city and interchanges with Line 2 at the terminus, effectively closing a loop with the eastern terminus of Line 5 interchanging with Line 2 at Huangbeiling. The extenstion takes the total length of the metro in the city to 292.6km.

In Wenzhou, the city celebrated opening a 19.1km extension of the first suburban rail line and sole rail transit connection in the port city, S1, the 34.4km line from Tongling to Olympic Centre, which opened in January. The extension runs to Shuang’ou Avenue and adds six stations including one at the city’s airport. The line is served by four-car Type D trains supplied by CRRC Qingdao.

Finally, in Ningbo a 5.6km extension of Line 3, the Ningfeng Line, from Gaotang Bridge to Minghui Road opened on September 28.