THE prime minister of the Czech Republic Mr Bohuslav Sobotka and the mayor of Prague Mrs Adriana Krnáčová officially opened the latest addition to Prague's metro network on April 6, when they took an inaugural trip on the 6.1km western extension of Line A from Dejvická to Nemocnice Motol. 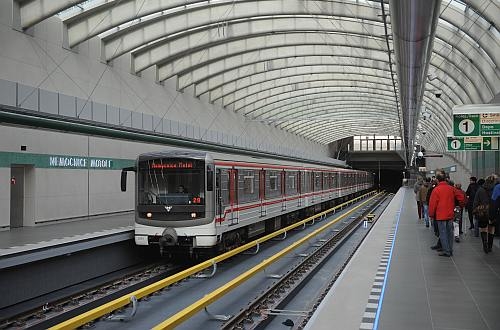 The extension includes four new stations at Bořslavska, Nádraží Veleslavin, Petřiny and the terminus at Nemocnice Motol, which serves one of the city's main hospitals. At 35m below street level, Petřiny is the deepest station on the extension, while Nemocnice Motol is only 5.6m below the surface and has a glass roof, enabling daylight to reach platform level. All other stations are fully underground, although all are accessible for passengers with reduced mobility.

The four stations on the extension have island platforms, with the exception of the 160m-long Nemocnice Motol station.

With the opening of the extension, tram line 2 has closed and many bus services, including those to the airport, now terminate at Veleslavín instead of Dejvická.

The city of Prague plans to extend the line from Nemocnice Motol to Vacláv Havel International Airport by 2022.