LOCAL authorities in Stockholm have reached an agreement on the expansion of city's metro network to support the construction of 78,000 new homes, which will help to meet rapidly-rising demand for housing in the Swedish capital. 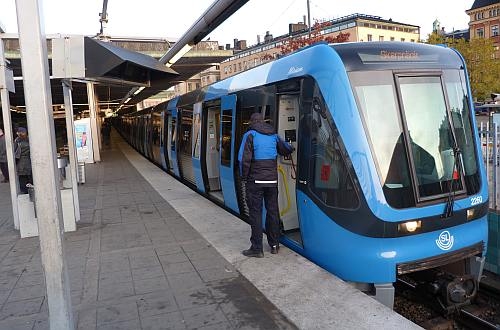 Under the agreement between the City of Stockholm, Stockholm County Council, the municipalities of Järfälla and Nacka, and Solna Town Council, 19km of new metro lines and nine new stations will be constructed by 2025. The four planned projects include:

• a branch off the Green Line from Odenplan to Hagastaden, which will open in 2020, with a further section to Arenastaden opening by 2025

• a five-station extension of the Blue Line east from Kungsträdgården to Hammarby Canal, Sickla, Saltsjö-Järla and Nacka Forum, scheduled to open around 2025, and

• an extension of the Blue Line Akalla branch to Barkaby station, which will be completed in 2021.

Construction is expected to begin on these projects in 2016. The programme will be partially funded by an expansion of the city's congestion charging scheme from January 2016. The total cost of the extensions, including rolling stock and maintenance facilities, is expected to be around SKr 25.7bn ($US 3.9bn).

The population of Stockholm County is growing by around 35,000 people per year and is expected to increase from 2.1 million to 2.6 million by 2030. The area accounts for a third of Sweden's labour market and a third of the country's economic growth.